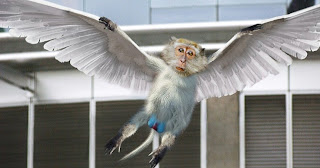 These mutant monkey birds inhabit warmer forested areas and are considered to be a nuisance to anyone within their vicinity. Woe be to a traveler that inadvertently stumbles upon a group of them, they will unleash their sonic attack on the interloper, no doubt deafening them at least temporarily and will alert any nearby predators that “lunch is on the way!”
Posted by Brutorz Bill at 10:31 PM