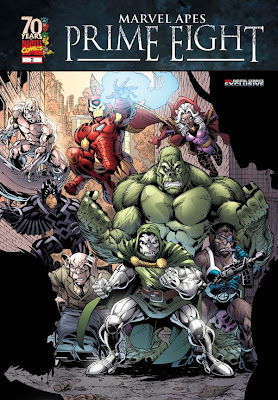 Here's one I had in my files for awhile now, great inspiration for Mutant Future!
Iron Mandrill, Charles Xapier, Nicole Furry, Cleook Sorceress Supreme, Silverback Surfer! and more!
Posted by Brutorz Bill at 10:43 AM 3 comments:

Sine Nomine Publishing has released a new supplement for their awesome Stars Without Number RPG. 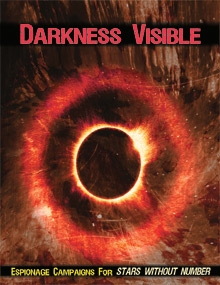 Espionage Campaigns for Stars Without Number!

Here's some info about this particular product;
"Look inside to find...

The history of interstellar spying in the Stars Without Number universe.
Details of the hideous maltech cults that threaten the very future of humanity.
A system for cooperatively creating intelligence agencies for your campaign and handling exploits against their nefarious rivals.
36 new tags for flavoring your cults, all of which can be used as world tags as well.
Over 200 new adventure seeds, each one keyed to a different aspect of an espionage agency.
NPC, scheme, and method tables for fleshing out conspiracies and dark plots."

Awhile back I scored the Mongoose Traveller RPG Book #5 Agent for a great price, I'm betting these two supplements will complement each other nicely! 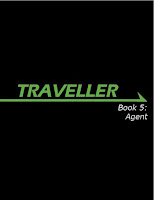 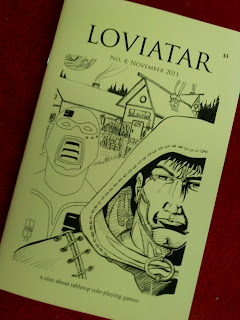 If you haven't checked out Christian's Loviatar zine yet what on Earth are you waiting for??
This issue even has an article for the X-plorers RPG!
Thanks Christian!!
Posted by Brutorz Bill at 6:51 PM 1 comment:

My back is finally doing better, getting old is no fun.  Went by the Friendly Local Comic/Gaming Shop yesterday, figured I could pick up some reading material while I continue to mend.  Found a ton of stuff! I hadn't been there in awhile, the Pathfinder shelves were packed! I think they had some new 4E D&D items, but I don't even look at those anymore.  I resisted picking up more Pathfinder product, don't get me wrong Paizo puts out awesome stuff, I was just looking for something different. Right before I got hurt I ran a session of Castles & Crusades which was a blast, I'll try to post about it soon, probably gonna play it some more, but I was looking for something different to read and get inspired by...
I found it on the Comic Book aisle!
DC has relaunched some of their titles, I won't get into that, I know some folks aren't happy about it but I was always more of a Marvel guy so it didn't bug me, + after they kept going up in price I quit buying them so much...anyways I spotted a couple of titles on the shelf that looked interesting to me. First up:
Frankenstein Agent of Shade 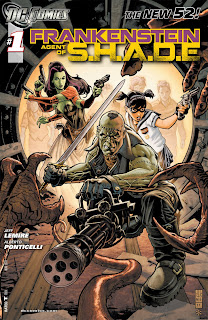 This is pretty sweet! It features Frankenstein with Guns! and even has some from the old Creature Commandos line that I loved back in the day.  This has some great inspiration for gaming, heck I ran something similar with this for D20 Modern many years ago...and if you wanted to lose the guns I can see it working with D&D as well. Heck with Pathfinder having the Gunslinger class you wouldn't even have to lose the guns really... I'm gonna have to follow this series for sure...
But what really sparked my interest was what I found next!  Those who follow my blog will know I've been on a bit of a Sci Fi kick of late, well with my Gamer ADD I'm all over the place...anyways, I spied something that really got my attention...check out the cover! 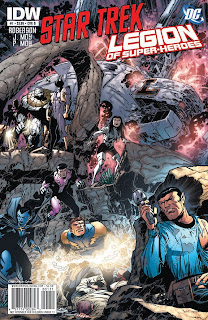 Two Awesome things Combined; Star Trek with Legion of Super Heroes!  Yeah, I know I said I was more into Marvel, but the Legion were always cool, I enjoy Cosmic Super Heroes and the Legion has always sparked my interest.  This is a six issue mini-series, where an alternate universe is created and a team of Legionairres and a Star Trek away team have to set things right.  Instead of the Federation we have the Imperial Planets of Terra, which is a mixture of Star Trek and Legion of Super Heroes!!!  I was always a fan of the Star Trek Mirror Universe also so this makes it even cooler to me!  Here's another teaser... Awhile back I did several alien races from Marvel Comics for the Stars Without Number RPG even worked up The Dreamer race directly from the Legion of Super Heroes for the game! I'm going to be following this mini-series for sure, I think this will be the perfect background for a great SWN Campaign, instead of the Terran Mandate mentioned in the SWN Rules, the Imperial Planets of Terra can be slipped right in there, using familiar things yet with very different twists.  Will probably still have The Scream occur, but can work in Star Trek races and Legion races in a new setting! Woo Hoo!
Could also use this with X-plorers, but for some reason I'm seeing this work better with the SWN rules...
Hmmmm things to ponder.. Feel free to comment, would love to hear everyone's thoughts on this.
Anyways I guess I've rambled on enough! Hope everyone has a safe and awesome Sunday! 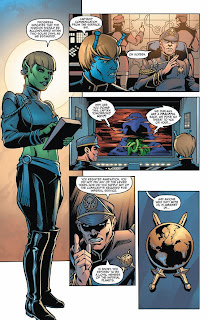 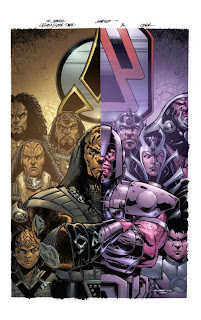 I've missed some Simian Saturday posts due to health issues (darn back), thought I'd better rectify that.
Here is a beastie based on a critter I saw in a Space Ghost Cartoon over on the Exonauts Blog. 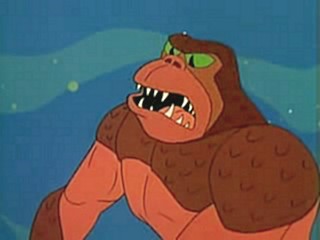 AC 16, HD 4d6, THB +4, ATT 3 claw 2d6/claw 2d6/bite 2d6, ST 15+, MV 6, XP 240
Special Abilities: Acute Sense: Smell, Optional Movement: Climb as regular movement, Scaly hide.
(The above stats are for a typical specimen, much larger and tougher ones have been reported, raise stats accordingly).
Moon Apes are fearsome beasts found on isolated worlds scattered throughout The Reaches. They are large ape-like beasts with certain reptilian characteristics. One theory among scientists is that they were possibly a creation of a forgotten advanced alien race and originally used as slave labor or some such, others say they were spread around by the mysterious Greys. What is known is that they are quite territorial and can be quite aggressive when encountered. X-plorer teams initially called them Moon Apes, and the name has stuck. One particularly frightening thing about them is that apparently if they have ample food and territory they can continue to grow to enormous sizes. Although there are no reports of encountering more than one beast of such great size at once, apparently the dominant ape kills or drives away any other apes that could be a threat to his dominance.

Worked this up for the cool X-plorers RPG but they can be used with all sorts of Old School games.
Creature is inspired by a beast seen in the Space Ghost Cartoon, no copyright infringement is intended.
Posted by Brutorz Bill at 5:04 PM 3 comments:

The Barbaric Weekend Continues with a sneak peek at a new Swords & Wizardry derived game due out soon!
Crypts & Things.
Check out the video about it posted by the author.  The references to Classic White Dwarf really sparked my interest.

Have a Barbaric Weekend! 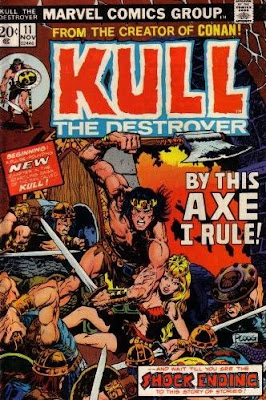 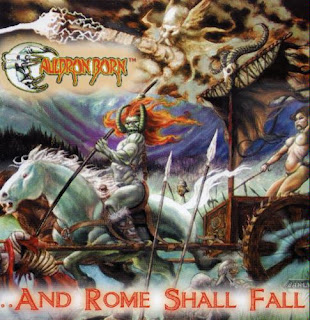 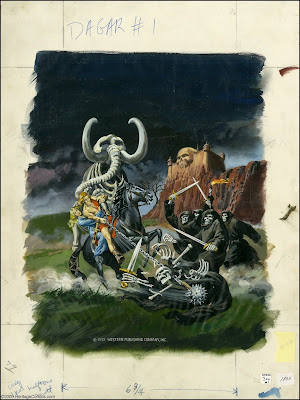 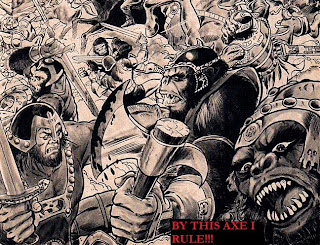 Updates will be intermittent for awhile.  I have been bedridden with a back injury of late so postings will be sporadic.  Here's a quick one I wrote up before I got hurt.  Just a fun little vehicle that I used to have fun with as a kid. Seemed to fit the vibe of X-plorers nicely.
Enjoy! 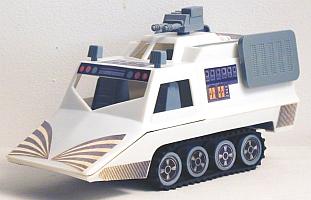 This Land Rover was initially developed for use in the irradiated zones of Earth, but has since found growing use and popularity with X-plorers team across the galaxy. Similar in design to the Explorer (pg. 23 Player's Guide Boxed Set), it has several upgrades and additional features not found in the basic Explorer ATV.
Like the Explorer, it is completely enclosed with an airtight, radiation shielded, armored hull. The Rogers Land Rover can offer full life support for a crew of 4 for 72 hours. This tracked vehicle can travel over all but the roughest of terrain and can even travel under water.
AC: 16 (Armored Hull) or 17 (when Force Screen is activated, although constant, prolonged use of the Force Screen will drain the vehicles battery and impair overall performance).
Other Features: Dual Turret light laser Cannon. 3-5d6. Ramge 200. cam cpver 180', with a 45' angle.
Built in Full sensor array (equivalent of Sensor/Survey Kit (as per pg. 19 Player's Guide Boxed Set).
In a pinch the entire outer hull can be electrificed doing 4d6 electrical damage to anything touching or on the outside of the vehicle. However, this will cause the entire vehicle to shut down and reboot taking 1d6 minutes to reboot.

Based on the Land Rover featured in Buck Rogers in the 25th Century Movie Pilot.
Posted by Brutorz Bill at 2:03 PM 7 comments:

Sorry for my limited posts of late.  Real life has kept me busy, but I have gotten a bit of gaming in! Woo Hoo!
In other news, I'm anxiously awaiting the arrival of my X-plorers Limited Edition Boxed set, in the meantime I went through my gaming collection for ideas/resources to use with X-plorers.
I've had a moment of inspiration I do believe...
Take This: 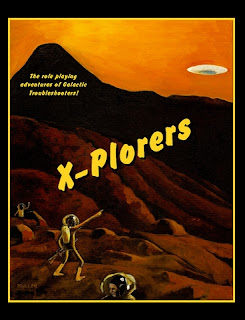 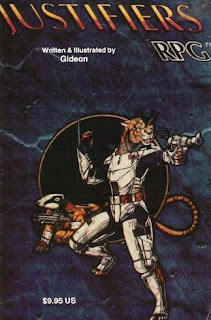 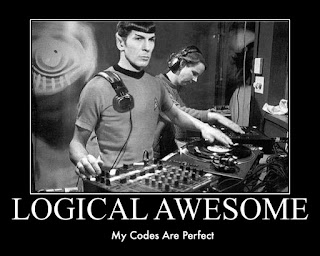 Any questions??
Posted by Brutorz Bill at 9:55 AM 4 comments: