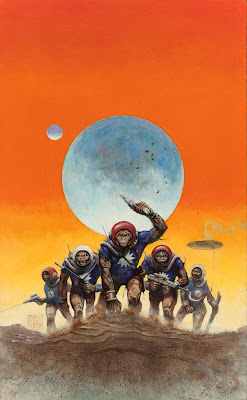 Stars Without Number : Codex of the Black Sun 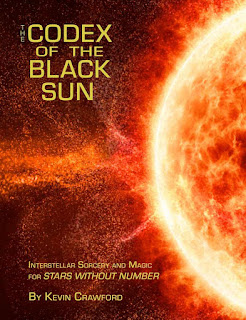 Codex of the Black Sun!
Insterstellar Sorcery and Magic for Stars Without Number!
Now this sounds right up my alley!
I haven't picked it up yet, due to an unexpected plumbing expense, right here before Christmas, but I will be getting this asap.
You can get it HERE
I haven't posted much about SWN in awhile, but did a good bit of stuff for the original version. Played a session of it at a Con awhile back.  I can't wait to see what goodies are in this latest release.
If you have this, I'd be curious to hear your thoughts about it!  Kevin Crawford does great work.

Posted by Brutorz Bill at 11:50 AM No comments:

I haven't posted about lego in quite awhile, but yes I am still an Adult Fan of Lego, now that I have a grandson I have an extra excuse to prowl the lego aisles at the local store.

I saw an online post the other day that made me take a second look... 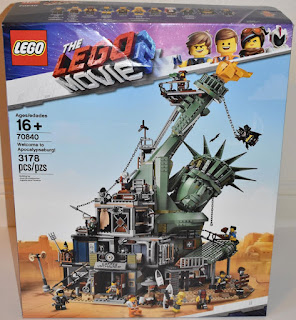 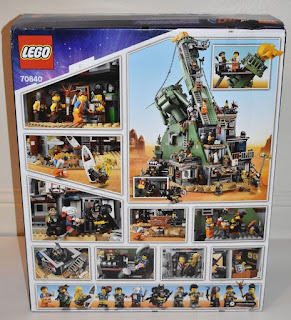 I have to admit this looks really cool, and appeals to the P.A. (Gamma World) fan in me. 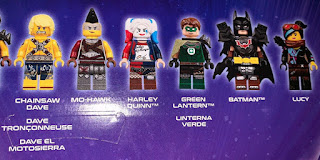 P.A. Green Lantern is cool looking, although I think Batman seems to be trying to overcompensate for something!  Now I feel the need  to assemble a lego Ape mini-fig army.  I'm sure this set will be ridiculously expensive, but wow it is cool looking!  Have a great weekend!

Posted by Brutorz Bill at 6:33 PM No comments:

My recent post about my acquisition of the Deathlok TPB. Got me thinking about the first comic I picked up that had Deathlok. 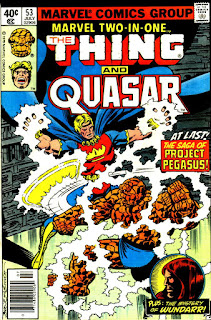 That was Marvel Two-In-One #53.   Featuring The Thing and Quasar.  This was my first time reading about Quasar, and Deathlok (spoiler) with Deathlok only showing up near the very end of the comic. 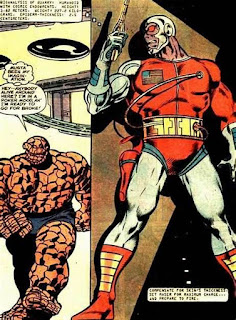 This comic also featured Project Pegasus. The timing of this comic was pretty important to my formative gaming GMing years/experience. You see as I have mentioned a few times in the past. D&D was NOT my first RPG to GM. It was actually Gamma World.  I started playing Gamma World in 1979, at the age of 10. Marvel Two-In-One #53 came out in 1979. It had cyborgs, weird powered beings and Project Pegasus! 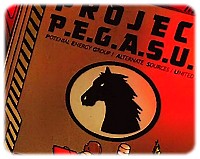 For those who don't know Project Pegasus was presented as a massive underground energy research station in the Marvel Comics.  Getting this comic at the same time I was starting to run/play Gamma World made for a perfect match. My Gamma World game needed underground installations of the ancients and Project Pegasus was the prefect fit! On the surface it looked like just a small outpost or collection of buildings on a rocky outcropping. Perfect to plug into my Gamma World Campaign.

Just a few years prior the Planet of the Apes TV series being on TV (I have treasured memories of watching these with my grandfather), and eventually I got to watch the original movies.  So of course the Apes were a major faction in my first Gamma World Campaign. Oh and on a side note the 1976 King Kong movie remake was fresh on my mind, so yeah there was a giant ape (or two) roaming about the Post Apocalyptic Wasteland..Anyways back to project Pegasus
My 10 year old imagination knew I needed underground vaults, bunkers and installations for my Gamma World game, and Project Pegasus was perfect for this, there were even maps!

These were perfect to use as inspiration for my Gamma World games. I didn't know the term at the time, but Project Pegasus formed the foundation of my first Mega-Dungeon, although it was for Gamma World and not D&D. Different sections of the massive installation had different purposes, one held energy powered heroes/villains. Can you say perfect material for a Gamma World game! 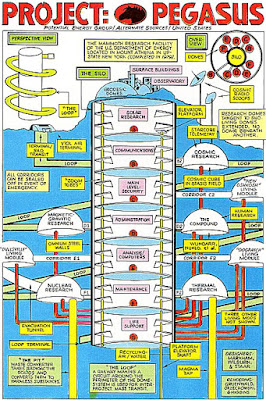 While my players, the most consistent being my cousin and my best friend Tormentor, although there were many others that floated in and out over the years, were the ones that played in my Gamma World Campaign the longest (over 10+ years) they didn't always know just how much of a power player the factions within and around Project Pegasus were controlling/influencing the Campaign. The Knights of Genetic Purity wanted to obtain it, The Created worked hard to maintain control of their sections of it and to continue "their" research.  Restorationists saw it as a way to restore civilization. And the apes! Well they wanted to destroy any hint that humans once dominated the planet. Many years later (1986) I discovered and hungrily read the first of the Deathlands series (Pilgrimage to Hell). That series heavily revolved around secret installations with a special connection between them. I adapted that concept to my ongoing Gamma World campaign and tied it in to my Project Pegasus original campaign concepts. But that is another story for another time. 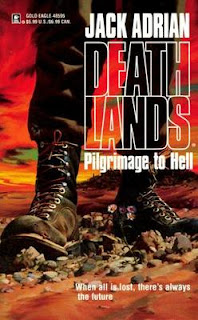 Part of the reason I mention this whole history of my early Gamma World Campaigns, is that Christmas makes me nostalgic for Gamma World. You see, over the Christmas holidays from school, my cousin would come into town and my buddy Tormentor would come over and we would play Gamma World non-stop for days at a time, we'd go without sleep, overly caffeinate  and it was glorious! So spend time with friends, family roll some dice and have fun! That's the best kind of memories. -Tis the Season!

Pardon if this is a bit off topic, but had to share. My grandson is about to turn 4, and he is getting at the age where we can sit down in the floor, set up his growing collection of action figures, build a fort for them and do a bit of "gaming". 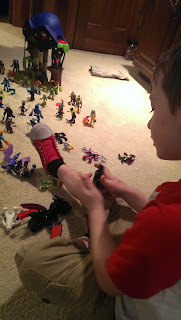 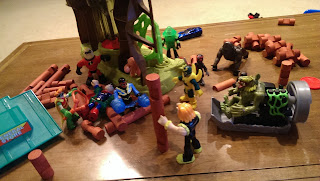 Yes that is a Mutant Green Baboon driving a Hovercraft!  He did that himself, guess a love of apes runs in his DNA!  -Good Times!

Posted by Brutorz Bill at 6:49 PM No comments:

In addition to the copy of WeirdWorld mentioned yesterday,  I got a copy of Deathlok The Demolisher (The Complete Collection). 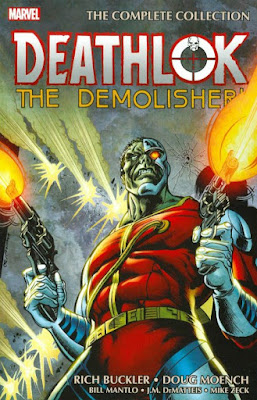 I've always liked this Marvel character, even though he was never really mainstream Marvel. I guess the Futuristic Cyborg nature of him appealed to the Gamma World fan in me. I've only had a few single issues with him in it over the years, so I'm really excited to be able to read up on his stories and adventures.  Definitely should have some good material in this one for gaming purposes as well.

In other news, I'm considering getting back to posting on my blog more. I let it slide, what with Graduate School, Work and posting more on G+, now with G+ going away, I'm thinking I may revisit blogging a bit more. Not sure if the audience is still out there, I know things have changed. I think next year will mark the 10 year anniversary of this blog. Wow, time flies.  The OSR is what brought me back to gaming and got me started blogging in the first place. More to come!
Posted by Brutorz Bill at 4:05 PM 2 comments:

I got an early Christmas present from a friend of mine. The complete original WeirdWorld TPB. 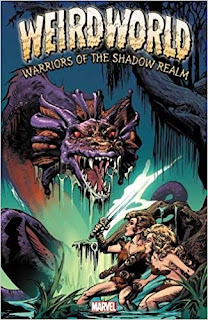 I've been wanting this one for quite awhile now. Really excited to have it as part of my collection. I can't wait to read it and loot/pillage it for gaming material for my future fantasy campaigns. This will be a great resource for my reading and gaming library! 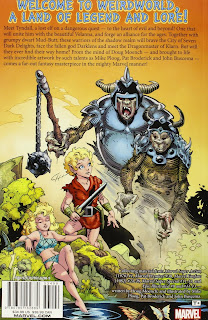 I hope you all have had a nice Saturday and have been able to squeeze in some gaming time or at least enjoy time with friends and family!


Posted by Brutorz Bill at 9:12 PM No comments:

Loss of a Friend

I lost a friend yesterday. Someone I came to know through gaming and was happy to call a friend. One of the good guys. Always had the biggest smile. Would do anything for you. Super smart, talented and a heart of gold. I know they always say that about people after they are gone, but for him it was all true and more.  I didn't know how sad he was. Behind that smile, unknown to me he was hurting inside. Now he is gone, we won't roll gaming dice together anymore, won't brainstorm our next campaign, won't scramble for the last slice of pizza, and won't laugh at each other's corny jokes.  I miss you my friend.
If you have that special friend in your life, check in on them today. Let them know you care and offer your support. God knows I'd give anything to be able to have my friend here with me today. If you are in that dark place and don't see a way out, please reach out to someone. You aren't alone, you've got friends. Just reach out to them. Please.
Posted by Brutorz Bill at 4:27 PM 9 comments: