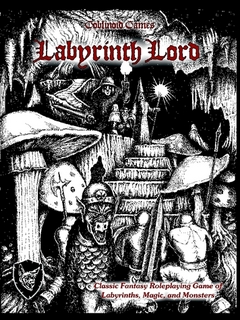 We were able to resume our Friday Night Labyrinth Lord game last night!  It is really great to be gaming again! The DM did an excellent job, we had several close calls, and lost the dwarf in the final epic battle with a band of gnolls.  We have had three sessions in this campaign so far, and this will mark our third PC death.  I lost a character (an elf), in session one, he was killed by a poisonous spider bite, we also lost our fighter in a battle with a gargoyle in that same session.  Session two we had several close calls, but no PC deaths. Last night we had more close calls than I could keep up with and in the final  battle lost our dwarf, earlier in the evening we lost a minotaur ally (the minotaur hated the gnoll raiders more than he hated humans, so we took advantage of that).  All in all I had a great time, I've never played a classic Magic User before, it has proven to be a fun challenge; one spell, no armor, low damage weapons, very low hit points!  Very fun and very challenging, hopefully the party's cleric of St. Cuthbert won't catch on that my mage is using poison on his daggers.  : )  I'm hoping we can keep this up for awhile, I'm loving being part of a campaign and a great group of experienced players.  We finished this story arc and saved the town. We even leveled up! Woo Hoo! Now I have two spells! : )
I'm thinking about finding the perfect mini for my mage, but as sure as I do that he will get killed! LOL  Actually we haven't even really been using minis with this campaign, it has mostly all been theatre of the mind, just like I played back in junior high, good times!  Hope you manage to get some gaming in this weekend!

Posted by Brutorz Bill at 4:15 PM No comments: 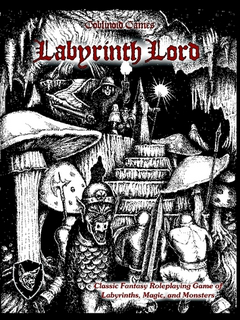 Well after a long hiatus, I actually got to game last night. The really cool part is that I was able to be a player, I wind up DMing 99.9% of the time, so this was  a real treat for me. the other great part is I got to play in an OSR game, Labyrinth Lord! This was especially cool for me, when I do get to play as a player it is in the more modern systems; 3.x, Pathfinder, 5E, so this was an unexpected treat. We had originally planned on playing 5E but due to work and life stuff, we opted to go with an old school simpler game.  The DM did a fantastic job and most of the players were experienced, skilled role players. I think the DM was using a modified published module, but the way he was pulling stuff out of Dungeon Alphabet, I have no idea what published adventure it originally was, it was fantastic! Beware of magical streams and fountains! The group have all played most editions of D&D and many other RPG's, so we brought a lot of experience to the table. The teamwork was great, and we were able to overcome some tough encounters using teamwork and strategy. Several players had just recently played Pathfinder, and they commented how much more lethal and gritty LL felt to them, I agreed with them, we had MANY close calls last night, and missed a TPK by the skin of our teeth, IT WAS AWESOME! Mind you I'm not knocking other games, I've had a blast playing Pathfinder, 5E and other stuff over the years, but something about this session just really clicked for me.   We are planning on playing again next week, I can't wait!
Posted by Brutorz Bill at 10:18 AM 2 comments: