Look what was on my front porch this afternoon!!! 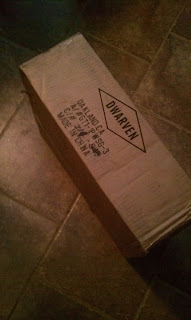 Unfortunately I have an event to attend this evening, so the official unboxing will have to wait!  I will say this thing is Heavy!  I can't wait to dig into this one!
Posted by Brutorz Bill at 5:10 PM No comments: 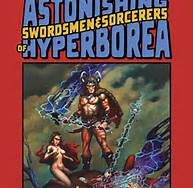 A friend of mine was going to run a Session of Castles & Crusades today, I asked him would he mind if I brought my Astonishing Swordsmen and Sorcerers of Hyperborea boxed set to show the gang during breaks.  He said sure, that he wanted to take a look at the game also.
While we were chatting before we got started, they asked me about the game and I started going into the Hyperborean Campaign Setting, both were very interested in it.  My friend that was going to run C&C said could we please please make up characters for AS&SH, the other player nodded in agreement (one player couldn't make it). I said well ok if you want too.

I didn't want to upstage the C&C game, but both of them were really interested in AS &SH. So we got to it, they both sat down and rolled up characters.   They were oohing and  aahing over all the various sub-classes. Even though I wasn't overly familiar with the rules (I just got the box in the mail a couple of days ago, however I've played AD&D for decades), the layout was so well done, that what questions we did have we could easily find the answers too. The biggest issue one player had was trying to narrow down which class to be, "they are all so cool" he told me. 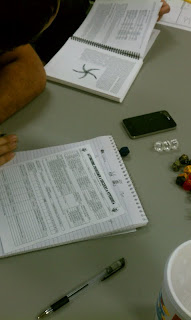 But before long, Houk the Viking Berserker and Rizlich the Kimmerian Shaman were born. Then they said, "Can you run us through something!"  I was saying, "Um..., well I hadn't planned on running, I'm still reading the rules, and I don't want to take away from the C&C game.." but with their eager faces who was I to say no, so I quickly rolled up some rag tag bandits.  Told them it was winter and they had just crossed the frozen peat bogs of the Lug Wasteland, they could see the black spires of the city of Khromarium in the distance, the red sun was setting and Saturn with its rings could be seen in the sky as dusk was fast approaching. The duo had teamed up because there is safety in numbers, although the shaman was a bit cautious around his hot tempered companion, one can't be two careful nowadays.  The bandits tried to ambush the two, and demanded they pay a toll to use the "road", Houk was having none of this and went into a berserk rage, charging and attacking.  The Berserker rolled a critical on the very first combat roll of the game!  My friend's eyes lit up with glee and he said,"That's a great sign! This is the game we need to be playing!", he badly mauled the bandit leader with his first hit, as Rizlich not to be outdone scored some serious damage on another bandit with his short bow, the other bandits were soon overwhelmed, and before long only Houk and Rizlich remained. Rizlich keeping a safe distance as the berserker hacked, kicked and spit at the dead remains of the fallen bandits.  Houk eventually calmed down and looted the dead bandits.  In addition to the bandits weapons & gear (none of which seemed to be remarkable), they found some electrum pieces a pittance of silver coin, a bit of polished amber and a map!  Rizlich studied the map in the fading light, he could tell it marked what looked like an area of tombs a days journey from the city.  Definately something to look into...on another day.  They needed warmth, ale and wenches!
Finally reaching the gates of the city, Houk bribed the guard, and added an extra bit of gold to learn what was the the best place for Good Mead and Great Wenches!  The guard smiled and replied,"Why the Serpentine Nymph of course!"  The two grinned at one another and headed off to find the Serpentine Nymph. 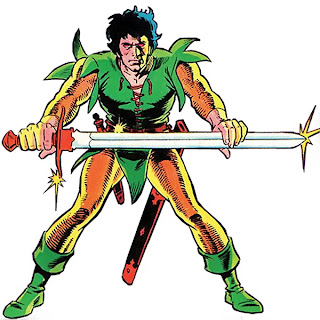 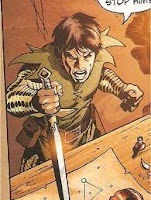 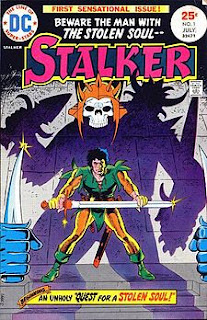 There was a package on my front porch when I got home this afternoon.

I had some credit at Noble Knight Games and I recently placed (as in Sunday, how's that for fast service!) an order for an Old School Style RPG that I've had my eye on for awhile! Now let's get to unboxing this! 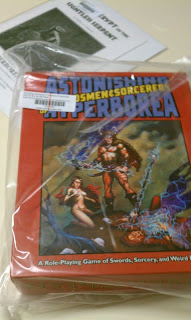 Astonishing Swordsmen & Sorcerers of Hyperborea
This is soo cool! It takes me back to the old days of RPG's coming in a big box set! 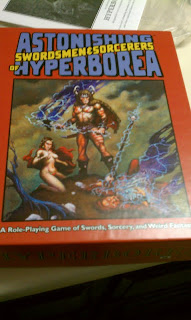 I can't wait to dig into this box of awesomeness!!

Tales of the Grotesque and Dungeonesque III

My Lulu order came in this week, and one of the items I was looking forward to getting is the latest volume in the Tales of the Grotesque & Dungeonesque series.  Volume III to be precise.  I have volumes I & II and am quite happy to add this one to my bookshelf.  Needles gives a great rundown of this latest edition on his blog. 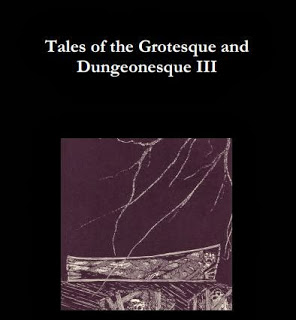 Mr. Shear does it again! just like his first two volumes, this one is jam-packed with tables and cool ideas to kick your gothic horror wheels into gear!
Good Gaming! - B.

There is an awesome Bundle of Stars Without Number Coolness to be found HERE.  You can even get a brand new release; Relics of the Lost.  I love the Stars Without Number system and highly recommend it for your Old School Sci Fi needs!!
Posted by Brutorz Bill at 7:14 PM 2 comments: