I just came across the Broken Earth Kickstarter.
Here's the blurb: Explore the wastes and rebuild civilization in this post-apocalyptic sandbox adventure. Compatible with the Pathfinder RPG Rules. The bombs fell. Billions died. Generations later you must pick up the pieces and rebuild this Broken Earth. 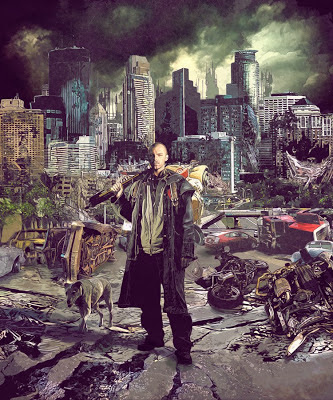 While I'll be the first to admit having experienced some frustrations with running Pathfinder, especially at higher levels, this Kickstarter looks quite tempting to me.  Sounds like this will sync up nicely with Warlords of the Apocalypse, another game I've been waiting on forever... There is currently 15 days left on the Kickstarter and its close to its goal but not there yet, I'll be keeping my eyes peeled on this one.
Posted by Brutorz Bill at 1:05 PM 1 comment:

Awhile back I saw someone mention using Heavy Metal songs as inspiration for new spells. Digging out my old Judas Priest Defenders of the Faith CD (well I actually have it on cassette, yes I'm that old) I threw this together, note the spells might not be completely balanced but I had fun working this up. My wife even said this makes her want to play a Cleric for the first time ever. I worked these up for the Blood & Treasure RPG but they can easily be used with your OSR game of choice. 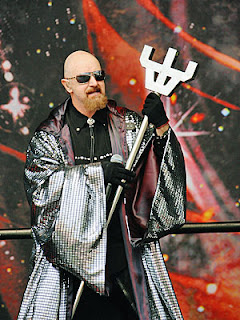 Freewheel Burning
Level: Cleric 3
Range: Medium (150')
Duration: 1 round/level
This spell allows the Priest to summon forth a wheel of flame that rolls in whichever direction the priest dictates, it moves 30' per round and leaves a flaming trail in its wake (trail dissipates in 1d3 rds.), it ignites flammable objects it touches and lights the area like a campfire would. It rolls over barriers less than 4' tall. The wheel has a semi-solid form, victims struck by the wheel suffer 2d6 fire damage and must make a reflex save or be knocked prone. The wheel dissipates if it exceeds the spell's range or the priest ceases concentrating upon it.

Rock Hard Ride Free
Level: Cleric 3
Range: Close (30')
Duration: 1 hour
A metallic light horse appears to serve you as a mount. The steed serves willingly and well, but will not fight on your behalf. The horse's skin has the equivalent of the Stoneskin spell in effect for the duration of its presence.

The Sentinel
Level: Cleric 5
Range: Close (30')
Duration: 1 hour per caster level
A ghostly sentry is summoned and bound to a specific site indicated by the priest. It protects/guards this location. The sentinel can see invisible and ethereal creatures and ignores illusions. Should an intruder approach within 30' of the area guarded by the Sentinel an eerie cathedral bell will begin to sound somewhere off in the distance. If an intruder approaches to within 10' of the sentinel the bells will cease and the Sentinel will attack with its ghostly throwing knives (+10 to hit, 2d6 points of damage) once per round. The spell lasts for 1 hour per level of the caster, but once the cathedral bells begin tolling, it lasts only 1 round per caster level. It the priest ever strays beyond 100' distance from the Sentinel the spell ends. Being nearly invisible, attackers suffer a 50% miss chance when attempting to strike the Sentinel.

Love Bites
Level: Cleric 4
Range: Touch
Duration: Instantaneous/1 hour + see text
The Priests touch deals 1d6 points of damage per two caster levels and the priest gains temporary hit points equal to the damage dealt. The priest cannot gain more than the subject's current hit points +10. All temporary hit points disappear 1 hour later. The victim of this attack must then make a Will save or be enthralled by the Priest as if under the effects of a Charm Person spell. If the drain attack took place during an intimate embrace, the victim takes a -2 penalty on their saving throw.

Eat Me Alive
Level: Cleric 5
Range: Touch
Duration: Instantaneous
At the touch of the Priest, the victim of this spell sees thousands of tiny mouths erupt out of their very skin, and proceed to eat them alive! On a successful save the victim takes 3d6 points of damage, a failed save results in a horrific death!

Night Comes Down
Level: Cleric 2
Range: Medium (150')
Duration: 1 hour + see below
The priest summons forth a supernatural darkness that fills a 15' radius. Even creatures that can normally see in darkness are unable to pierce this magical darkness. If they fail a Will save they are also filled with an intense sense of Doom and Despair suffering a -1 penalty to all attack and saving throws. This lasts for a full minute even if they are able to escape the darkness.

Defenders of the Faith
Level: Cleric 9
Range: Close (30')
Duration: 6 rounds
The priest summons a force of Heavy Metal Warriors who will serve him until slain or until the duration of the spell expires. The Priest can summon 1d6 CL 5 Warriors. The Warriors match the priest's alignment. Warriors summoned by Lawful Priests will have the Celestial template, Warriors summoned by Chaotic Priests will have the Fiendish template.

Need some Flying Monkeys or Planet of the Ape-esque minis for your Post Apoclayptic or other RPGs?
Well Sgt. Major Minis has 'em both and then some!
The site has all kinds of other 28mm minis perfect for your P.A. games; Survivalists, Chem Suit Soldiers, Nuns with Guns! Waste Priests Etc.

I'm still doing my part to spread the word about this cool game.  The Mutant Epoch!
Here is a recently released introduction video about the game.

Posted by Brutorz Bill at 9:48 AM No comments: