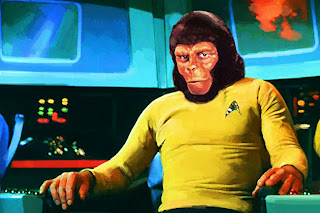 Oh and to make this post a bit more cooler, I just found where Starter Traveller RPG is on sale for FREE!
Check it out here!  It's a Christmas Special running through December 31st!  All the recent STARSLUGS posts on various blogs have got me looking at Traveller again.
Have a great Simian Saturday!
Posted by Brutorz Bill at 9:30 AM 3 comments:

Welcome to Khromarium We hope you survive the Experience!

I hope everyone is having a great Thanksgiving!  I'm finally getting some much needed downtime.
We played Astonishing Swordsmen & Sorcerers of Hyperborea last Sunday, I can't say enough good things about this game.

Session 2a : Welcome to Khromarium; We hope you survive the Experience!

Houk and Rizlich, soon realized that finding their way around the ancient, massive city of Khromarium was a challenge in and of itself, both were awed by the city's massive towers, eerie and dark, their shapes unworldly and unnatural.  A grayish snow was falling and covered most everything; they could see massive smokestacks off in the distance and assumed it was ashes from those smokestacks that were tainting the snow grey; at least that's what they hoped it was.  Occasionally they would see figures in the distance moving about with a purpose, most were heavily cloaked and hooded, not unusual in the bitter cold of the dark night.  Houk vainly tried to hail a few of them, he had wanted to make it to the Serpentine Nymph tonight but at this point, having wandered for what seemed like hours, not to mention cold and hungry he'd take any place with a fire that was out of the wind.  Unfortunately anyone that they saw... and those were few and far between would quickly avoid the pair and dart away into the darkness of the night.
Ostra, had made the long journey to Khromarium, having just recently arrived at the docks, the city was beyond anything she could have imagined.  Noting the unnaturalness of the dark towers, she shuddered and it wasn't just from the cold.  The last words of her oracle were that the source of the evil that had devastated her people was to be found in Khromarium, but she could never have imagined a place so vast.  This was far from the wilderness that she knew so well. Shouldering her gear she set out into the darkness, with some of the crew from the ship.
Houk and Rizlich, caught a glimmer of hope, lights could be seen in the distance, as well as, noises of what sounded like people up ahead between the old buildings and structures. They paused however when they heard a scream piercing the night, a scream that was cut short.  They moved forward with grim determination.
Ostra, never did trust these crew-men from the ship, they acted more like pirates than true sailors.  She never cared for the glares they gave her on the ship, but now that they were off of the vessel, away from its Captain and walking down these eerie darkened streets she knew she wasn't safe.  When she overheard two of them murmuring their plans for her, she knew she had to make her move.  When they turned to the left down a dark snow swept street, she veered to the right and hid in the shadows until they were gone. She made her way in the darkness, while happy she had ditched the unsavory crew, she now found herself lost in the largest city in all of Hyperborea. Then she heard a scream cut through the cold dark night.
Houk, Rizlich and Ostra found themselves face to face after rounding one of Khromarium's twisting streets.  After a short exchange they realized they were all new to the city, they started to walk together for a bit, figuring their would be safety in numbers, all three looking for a warm fire and some hot food.  Rounding another turn Houk stumpled in a pile of trash…pausing he realized that it wasn't trash but was in fact a corpse and the body was still warm. Upon examining it, Rizlich the shaman noted the body had what appeared to be acid burns, and to add to the horror, several chest wounds on the dead man had lavender wriggling worms coming out of them! Ostra grimaced at this, some horror from the Black Gulf was no doubt behind this murder. The ranger spotted a trail of slime leading off in the direction of some ruined temple structure.  Just then an order of "Halt where you are butchers!" rang out, the trio looked up to see they were surrounded by a patrol of the Night Watch and they looked none too pleased!
More to come….

It's a Great Time to Pick up AS&SH! 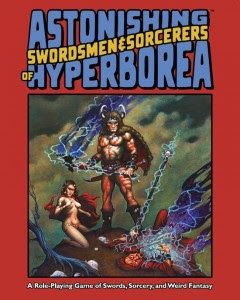 We played Astonishing Swordsmen and Sorcerers of Hyperborea again Sunday, I have to once again say what a great game this is!  I'll try to post something of a session log soon.
If you've been on the fence about picking it up, now is a great time.  From now till December 4th it is 20% off! You can get it HERE
Posted by Brutorz Bill at 6:45 PM No comments: