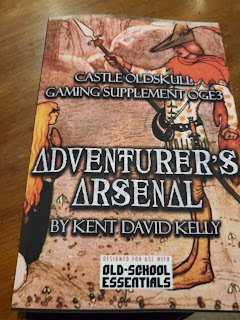 Unfortunately my Old School Essentials face-to-face campaign has been on hiatus due to the pandemic. We were really enjoying OSE, before our forced hiatus occurred. One minor quibble we found, was the desire for more diversity with weapons. Most of us being around the hobby for awhile, we liked the idea of more weapon options.  So about a month ago I saw that Castle Oldskull had put out a supplement packed with a ton of weapons stat'd up for OSE.  I ordered this a  month ago from Amazon, but due to their need to do priority shipping of essential items (toilet paper, medical supplies etc.), it took a month for this to get to me. I just got it yesterday and I'm still reading through it, but I am glad I picked it up. This will fill that need for my OSE campaign when we do get back to it. One quibble I have with the book, is the layout is a bit "meh" majority of weapon descriptions are split over two pages, causing some flip back and forth, but that is by no means a deal breaker. The book has a handy index, so if you need to look up a weapon, you can find it in the index and then flip right to the appropriate page.  Good stuff!  So if you need barbed arrows, harpoons, tridents and more for your OSE games, you may want to look into this one!  Hope everyone is safe and healthy! We are getting through this mess!

Update- for the print version of this on Amazon
PDF here
Posted by Brutorz Bill at 11:02 AM 4 comments: 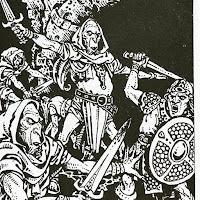 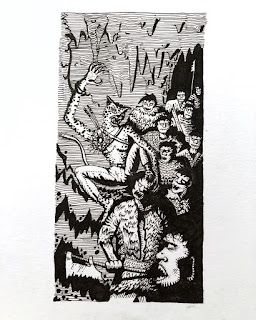 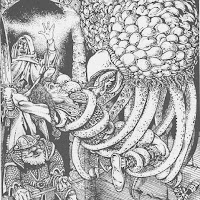 The Crimson Cadre (Red Shirt Rangers)
Travel across the wastelands is a dangerous endeavor. Isolated enclaves and communities struggle to survive on their own, which is why what little trade exists between them is so vital for their ongoing survival. A few brave caravans and merchants brave the wastes to bring trade goods, supplies and information to these separated communities.  Good coin can be made for those willing to take up the job of caravan guard, although few are willing to do it, given the short life span such work brings. That's where the Crimson Cadre, more commonly known by others as the Red Shirt Rangers come in.  Everyone knows they are clones, everyone except perhaps the Red Shirts themselves. They all look alike, sound alike, act alike and for the most part die alike. 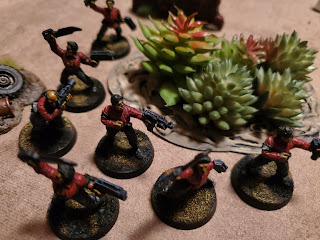 Equipped with dark red leather tunics (+2 to AC),  Daggers (1d4 damage) and single-shot bolt pistols (2d8 damage). They can be "rented" for guard duty across the wastes. Payment is made up front to a mysterious entity/organization known as "The Network".  Payment is nonrefundable, and killed cadre member's weapons and gear are to be returned to The Network, in order to get your gear deposit back.
Red Shirt Ranger 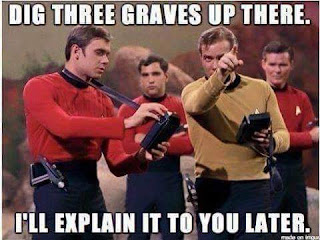 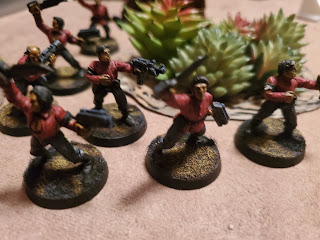