I recently worked up a couple of villains for Mutant Future from one of my favorite Star Trek TOS episodes "The Savage Curtain". In the same episode working for the good guys was Abraham Lincoln! I didn't really even consider doing up a version of Lincoln for Mutant Future, sure I guess I could have made him a robot or something but that just didn't seem to be the right fit. So I did up the two villains then moved on to other stuff. Fast forward to today, Jeff's Gameblog did a big announcement about his upcoming work on Encounter Critical stuff and I got thinking about the game and how much I enjoy kitchen sink campaigns, it's what drew me to play Rifts back in the day.  I then got to looking at some blogs about EC, and in my search I found this cool picture over on Malevolent & Benign's blog. 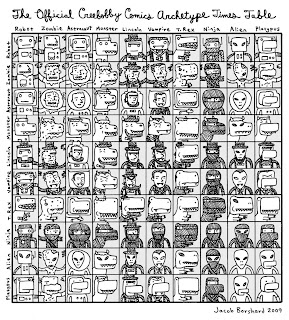 When I saw the Lincoln picture I knew what I had to do!
So without further ado I present a new race for Encounter Critical; Lincolns. 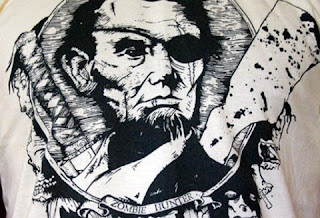 Lincolns
aka "Logsplitters", "OldAbes" or "HonestAbes"
Lincolns are humans but they are a special type of human. During the Galactic War the Vulkin Star Empire was being torn apart, the Vulkins found themselves with insufficient leaders to hold the line and inspire the soldiers of the empire. Logic dictated that something needed to be done. Humans possessed the raw ability and courage that many Vulkins lacked, time and time again humans motivated by a strong leader would rise up against impossible odds, odds that logically dictated defeat and failure only the humans would courageously fight on and somehow win, but humans were too unpredictable and too varied. For every heroic human there was a coward, or even worse a raging lunatic. The Vulkin's needed a special human leader one they could count on to act in a way that the Empire needed. So the Vulkin's devised a Top Secret plan in the hopes of saving the empire. DNA from an ancient human leader was obtained and a secret cloning facility was established in orbit around the planet Vanth in the Medieval Rim. The facility set to work immediately. Growing clones and educating them with experimental Psi Phasic Technology. Data from the life of the real Lincoln was downloaded into the clones growing minds.
All went well until disaster struck…What happened isn't clear but what is known is that the orbital facility was either attacked or sabotaged, no doubt by enemies of the Vulkin Star Empire. In a last ditch effort the surviving Vulkin Scientists loaded up the Lincoln clones (all at various stages of age, knowledge and development) into emergency escape pods and sent them to the planet below.
The Lincolns have survived on the planet since then. The pods scattered to all parts of Vanth and the Lincolns went their separate ways, Lincolns tend not to congregate amongst themselves, usually only one will be found in a given area and never will more than two or three be encountered at any given time, no doubt seeing an exact duplicate of oneself can be a bit disconcerting. A curious side effect of the cloning techniques is that when a Lincoln reproduces with another human, the offspring will always be male and will always be another Lincoln or half-Lincoln (if the mother's species is non-human), these offspring will be in effect clones of their father, not just a child of the parent but a copy of the father. They even have the psi-"memories" originally taught to their father (or father's father) on the orbital facility. However, memories their father gained after birth or after psi-education are not passed down, so different Lincolns will still have different knowledge, skills, attitudes and outlooks depending on their environment and upbringing. Appearance-wise it is only if the mother is not human that they show a genuine difference in appearance from their Lincoln father and even then others can still tell that their father was clearly a Lincoln.
Lincolns are quite often in positions of leadership wherever they are found. Often they are warriors; seldom do they follow the path of the Warlock, tending to not believe in magic on a genetic level. Some may be Criminals, especially if they had a difficult childhood, although even if a criminal they will usually be in a position of authority. There is supposedly even a Lincoln running one of the main Crime Syndicates in God City.
Leadership +3 , Magic -2, +2 Intellect, -1 Luck, +20% Command, +20% Restore Courage