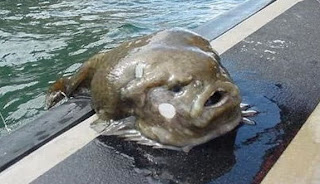 The horrible Ormsyn is a form of intelligent mutant fish that can survive on land for short periods. They are particularly cruel creatures and enjoy causing pain and suffering amongst land dwelling humanoids (pure strain humans in particular). Villages located near Ormsyn waters, have many legends about the Ormsyn (many are true), some villages have been so terrorized by the fiendish fish that they have relocated further inland to escape the range of these mutant monsters. Swimmers in Ormsyn waters are particularly at risk, they will swim up and attempt to brush against a swimmer trying to paralyze them with their contact poison, they will then watch with glee as the swimmer drowns, unable to swim to the surface. They may also try to combine attacks against an opponent attempting to poison, bite and unleash an electrical discharge all at once. If they feel comfortable and have time (sneaking into a hut at night while their victim is asleep) they will attempt to latch onto their victim and gain parasitic control then force the victim to go on a killing spree! If injured they will attempt to reach the nearest water source to escape using their Regenerative powers to strike again another day when least expected.
Posted by Brutorz Bill at 7:09 PM