Over on the Under a Blood Red Sky blog, Spielmeister recently posted a session wherein all kinds of Kirbyesque coolness was going on.  Seems like some Rat-men have taken over a mine that the party seeks to recapture, the party has even allied with some mutant felines on a Thundarresqe ship! Well of course being concerned about the welfare of the poor helpless rat-men I thought I'd work up one of them as an NPC villain to help give the poor little ratties a chance. 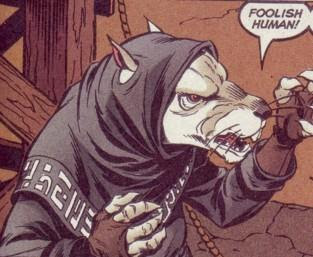 Ratsputin is a nasty, cunning and vicious rat- man, and those are his good qualities. While other members of his brood were stronger, faster, and tougher than Ratsputin, he was always smarter. Using his precognition ability to stay one step ahead of his enemies and his innate understanding of tech to use and select the best possible loot, has enabled him to worm himself into the position of Tech-Seer for his group. While his fellow rat-men may dislike him, none can deny his uncanny talent with working with and using the ancient weapons and technology of the ancients, which benefits them all.
Ratsputin is one of the few rat-men that can actually read the writing of the ancients. He has a collection of old newspapers and comic books, although he doesn't quite understand everything he reads and thinks the comic book characters he reads about were actually real beings in the time of the ancients.
If Ratsputin gets a warning of his impending doom (either from his precog ability or other means), he has no problem quickly donning his gas mask and letting loose with his Blood Agent Grenades, not caring if his fellow rat-men get caught in the blast. He will then flee via one of his many previously prepared escape routes, no doubt to get revenge another day.

Based on the D.C. Comic character Ratsputin from the Superboy Comic. No Copyright infringement is intended.
Posted by Brutorz Bill at 3:14 PM