I recently dropped out of Co-DMing/playing in our Pathfinder group.  My work and very soon school schedule is just not cooperating with hobby fun type stuff.  I've missed too many sessions to have a good handle on what's going on to resume DMing it, and I need to be able to attend more regularly as a player to keep up with everything and be an effective team member, so I opted out. I may be able to run some Mutant Future one shots or maybe even an Encounter Critical game at the FLGS some time, but that's not even really an option right now.   Fortunately I have this blog and you good people to help me get some semblance of a gaming fix.
I recently posted that I was in a major Sci-Fi mode. As a result of that post Clovis has sent me an interesting Sci Fi RPG called Red Planet that I've been looking at, it is tied into a certain ERB series of books and is also tied in with Bronze Age Miniatures (love those Mutant Apes!!!).  Throughout the game are excellent quotes from the series to "get you in the right mindset".  Clovis has a definate love of the ERB Barsoom series and works hard to capture the setting.
In that same post, the X-plorers RPG was also mentioned.  In my comments I said X-plorers was a little too basic for me. After I posted that I got to thinking about it.  I realized I had a stack of D20 Modern/Future rulebooks (including Dawning Star, Darwin's World, Gamma World) that I have hardly used because for me it takes to darn long to work up stat blocks for NPC's, beasties and such.  I'd much rather spend my prep time working on a Campaign rather than stat blocks. So why did I post that I needed more rules when in the games I already owned that had more rules I didn't play them?? HMMM....Then I noticed over on the Sword +1 blog that Mike D. is working on a project that greatly expands on the X-plorers game, not really adding more rules mind you but more weapons, gear and aliens.  Reading up on what he is working on got me to thinking, dangerous I know, that I needed to take a second look at X-plorers.  With my limited time to work on stuff and my renewed and ever-growing appreciation for OSR-type games, I find myself quite intrigued by Mike D.'s work and am anxious to see more.  Heck, I may even see about working up some stuff myself.  ; )
-Good Gaming 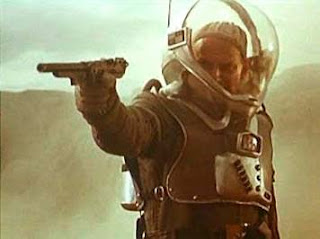