I've had this one for a little while.  Someone mentioned it on a message list I'm on some time ago (I think it was the Gamma World one my buddy Tormentor founded) so being a Post-Aocalyptic RPG collector I picked it up.     It's called Radz. 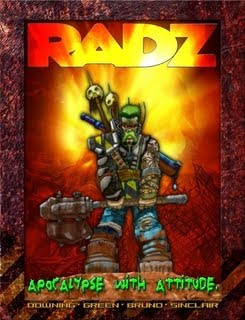 You can get it over on Drive Thru RPG or Lulu.  I picked up the print copy, cause I'm just an old timer that hasn't quite fully embraced the wide world of PDF's.  There's a preview for it over at Drive Thru that will help give you an idea of the art and the attitude.  It's described as "over-the-top apocalyptic sci-fi action" with such commentary as "APOCALYPSE WITH ATTITUDE. ULTRAVIOLENCE WITH A WINK. ." caps are from the game designer/writer not me.  It does have a definate attitude and a style all its own.  Some of the races you can play are Brainz (mutant brainy types *duh*), Gleanerz (mutant dwarves), Flagz (PSH military "GI Joe" types), Law Dogz, (notice "s" is not used, thats part of the Attitude), Redhandz (sorta remind me of the native american Vengequan from the OOP Shockforce miniatures game), Wikkids (oops I slipped up and used a real "S" sorry about that). Actually I like the Wikkid they sorta remind me of the Doomsayers from the Deadlands ; Hell on Earth game (with more attitude).

There are some interesting items in this book.  The art while somewhat cartoonish is all part of the games charm and attitude and works for this product, and is actually better than art I've seen in other more "mainstream" game products. Radz has its own game mechanic that looks pretty basic, but I don't see myself using it as is.  Skill system is very basic and probably adaptable to other systems, if that's something your looking for.  I like the two pages of Radz Slang in the book and while not all the terms are appropriate for all campaigns you can have some fun NPC interactions with you players by having the local Bonesetter (healer) talk about a low-down Pork (Law Dog) that's All Hell and Gone (out of control) that got took down by the local Wikkid (rad mage?) in one Helluva Pork Roast (Show down between Wikkids and Law Dogz)... that'll be 200 Dukkits (coins).  I also like some of the NPC's, especially their names (Jax Wigsplitter, Vaughn Skullmonger, Colonel Diesel, T-Bone, Nurse Scratchit to name a few).

Production wise the book suffers poorly, I hope the PDF is of better quality (and by the pdf preview it looks like it is).  The book I got from Lulu is on a gray background that is hard to read, on a few pages (but not on the majority) the print is rather blurred and hard to read. Also the map is blurry in my copy, and I have to strain to make out the place names.  Kinda disappointing.  But I don't know if this is the fault of the original material or a poor print job by Lulu. Another oddity is in places in the book words with "fi" in them like filters don't have the "fi" so you've got to do some interpretation, not hard but definately not professional.

I will be using some stuff from this book in my Mutant Future Campaigns. Personally I think the print copy is over-priced ($16), especially given all the production issues.  If I'm straining to read a book there IS a problem. My vision is one of the few things that my age hasn't affected (yet).  : )

Guess I'd better do that grading scale thing again....

Presentation: 5 out of 10 (sorry but it's hard to read in places (especially the map) and the art while good is too dark in the print version, I'd probably score the pdf version much better)

Utility (for Mutant Future scavenging purposes): 8 out of 10
Posted by Brutorz Bill at 12:19 PM