Dang it's Cold!!! Penguinis the Pugnacious (NPC for Mutant Future)

I live in the Southern United States, and while I can handle the cold, (we get hot summers and cold winters).  It's darn cold outside.  I think it is around 0 degrees outside right now, and the wind chill is putting it below zero! I know you guys up North of me are experiencing weather in the way below zero category but this is quite unusual for us.  Anyways to "celebrate" the cold I quickly worked up this guy (quickly because I gotta go get back in front of the fireplace!!!). 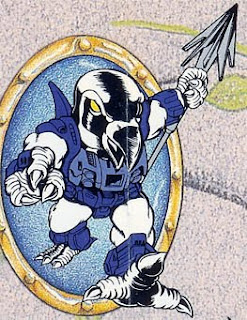 Little is known about Penguinis, given his negative empathy defect he tends to keep to himself. He dwells in the Cold Lands, where most beings would rather not visit much less live. He does enjoy a good fight, and when he's not honing his combat skills battling Mutant Polar Bears, he is tinkering around with his weapons and gear to make them better in combat.
Penguinis can swim at his full movement rate. He is quite adept at moving on ice and snow and can hold his breath for extended periods.
If one can overcome his Negative Empathy defect and his overall surliness he could make for a good guide through the Cold Lands.

Based on the character Peguinis from the Battle Beasts Toy-Line from the 80's.
Posted by Brutorz Bill at 11:10 PM