It Was a Three-Eyed, Blurry, Wooly Scaly Hippo err...yeah that's it! 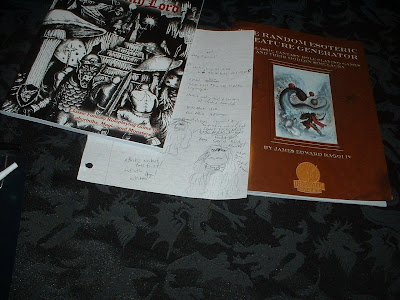 Tonight I got to sit down for a bit and read through some of my new gaming books. In reading my copy of The Random Esoteric Creature Generator I knew immediately I needed to get out my dice and get busy creating a beastie! Within minutes I had a handle on how the simple yet quite innovative system worked and I rolled up my beast!

Appearance : These large hippo beasts are covered in a thick wooly fur not unlike that of an ancient wooly mammoth, in addition to their fur they have a thick scaly hide. They have three eyes and a massive toothy maw.

Further Description: The beasts are quite territorial as well as hungry and will devour most anything they can catch. They often seem able to sense the weakest member of a party (Per the DM's screw with the players skill) and will go after that party member first. Their swimming rate allows them to quickly move up under boats, capsizing them and eating the floundering adventurers that are splashing about in the water. To add to their fearsomeness they are constantly under a blurred effect making it hard to even hit them in combat. Then if you actually hit them, you've got to get through their tough scaly, wooly hide.

This really was the first beast I rolled up, with little variation from the dice; I think I only rerolled one or two things just because they didn't make sense, the rest I kept. I think it took me maybe 15-20 minutes to work up this beast (mind you I make up a lot of beasts anyways so your mileage may vary). It actually took me longer to try to draw the darn thing, and I still hate my drawing, which is why you don't get a good look. Ha!
Anyways, I think this critter is waay cool! I would never have come up with such a creature by myself. A Wooly Displaced Three-Eyed Scaley Hippo Beast! I mean that's just priceless. This would work for Labyrinth Lord (would be a darn tough encounter, although I had control of the HD range), I quickly saw this as a perfect mutant beast for my Mutant Future Campaigns. So I upped the Hit Dice to make for an appropriate challenge. I've mentioned in earlier posts that I want more variety amongst my mutants, especially beasts and such. This is perfect for that! While the book actually seems to be designed for fantasy games, you can see it works just fine for Mutant Future games. Also this creature would be perfect for an Encounter Critical game; I "borrowed" the phasic term from that game actually. If I toned it down a bit (or not) I could even see using this as a fearsome alien encounter in X-plorers, I just hope the X-plorers brought plenty of heavy weapons!
Anyways in case you can't tell, I really like this product! 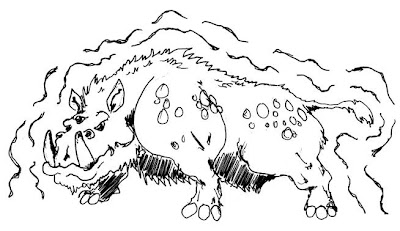 *1/29/10 Update* Super Special Thanks to Eli!!
from the I See Lead People blog, after reading my initial post about this beast, he was kind enough to draw it and send it to me!  Thanks Buddy!  Eli said after "initially reading the description of the beast it would make a cool Hyborian-styled god. A huge, hulking, hairy, scaley hippo god with a third eye!" I gotta agree.
Posted by Brutorz Bill at 10:03 PM