Sorry for my limited posts of late, I've been having to put in alot of hours at work lately and that has taken up alot of my free time.  But there's another reason for my absence....I recently picked up Dragon Age : Origins for our Xbox 360.  When time has permitted I've been playing it.  Course that's usually after my wife and teenager has finished playing it for the day.  : )

I haven't been able to play it a whole lot, but what I've done so far I have quite enjoyed, I never got into World of Warcraft, but this is quite fun.  In playing it I've come across some cool NPC's that have joined my party.  One in particular; Sten the Qunari sparked my interest.  I got to thinking that it would be cool to work up the Qunari for our Pathfinder Campaign.  After doing some internet searching I stumbled across this: 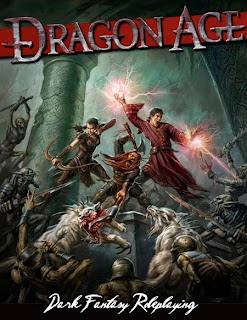 Green Ronin (makers of Mutants & Masterminds) will soon be releasing a tabletop RPG version of Dragon Age!  I've been reading up on it and it sounds cool.  I may have to pick this up and try it out!  My daughter wants to play a Mabari War Dog! Not sure if they are allowed as characters in the RPG, but in the computer game one is a valued member of your party.