My wife commented that my last tale was a bit on the dark side, so I thought I'd lighten things up a bit with this post.  I also thought I'd work up two at once in this story and every master villian needs some lackeys! Enjoy!

The ape-man scratched his head and twisted his mouth a bit as he tried to remember what the symbol on the faded ancient card meant..the weak campfire light made it hard to see..and Monkian's limited intellect made it even harder for him to process…A red diamond with what he thought was the number 10, but sometimes he got confused…the other card had a 2, but he knew the symbol on it stood for Clubs and Monkian liked clubs! So he put down that card, and yelled out a triumphant "Uno"!. Across the rickety table from him, a rather skinny dog man tried, rather poorly, to hide his laughter…."You moron that's a 2, why would you play that card??? And for the last time this isn't Uno!! Monkian scowled, he knew he wasn't that smart, but he didn't like being reminded of the fact, especially by the stupid jackal! Monkian glared at Jackal Man and pounded on his chest and said, "It's Clubs! Two of CLUBS! Which means if you say I didn't win, I club you…uh..Twice!!!" Monkian drew his flail, making a menacing move towards the mutant jackal. Jackal Man, cringed, "All right…all right…you win! Uno it is or whatever…This is a stupid waste of time anyways!'…."Guard Duty…bah..What's the point? No one would ever come out here?"…Monkian snarled back, "Never question the master! He knows what's best! Plus if he ever heard you well…." Monkian made a motion of his hand slicing across his throat. Jackal Man looked about nervously…absently clutching his own club. "I wasn't questioning the dark one at all, just stating the facts." The mutant Jackal then sniffed the air and made an unpleasant face. Monkian looked at him,"what is it?" The dog man with a look of distaste, "The smelly one..he's coming." The monkey man…looked confused…"but the buzzard isn't supposed to be here, he's back at his workshop far from here?"…Jackal Man ever frustrated with the apes limited intellect, but too cowardly to push the issue commented back,"No Monkian, the other smelly one…The Skunk! Stinkor! he approaches."  Jackal Man tilted his head to the left he could now hear Stinkor's approach. Eventually Monkian was aware of an approaching something and soon enough the mutant skunk man came into view. Monkian could see the black and white furred warrior in the dim light. Stinkor clearly had been into something, he had a whole bag of loot slung over his shoulder, and a really nice looking mace tucked into his belt! Monkian wanted that mace! It looked like it might be a weapon of the ancients!

Monkian leapt in front of Stinkor, his shield held high and flail twirling menacingly, Halt who goes there?" He said with a bellow, all the while greedily eyeing the ancient mace tucked in Stinkor's belt. Jackal Man laughed nearby, but clutched his club at ready just in case…he also made sure he was in easy reach of the spears stacked nearby, if things turned nasty he had no intention of getting within range of the mutant skunk's stench attack. Quickly glancing over his shoulder, the mutant canine also made sure he had a quick escape route....just in case!
Stinkor had no time for this, he had urgent business with the dark one and this imbecile monkey was in his way! "Fool you know who I am, stop wasting my time! I must see the dark one!" Monkian didn't like Stinkor, he didn't like being called a fool either, and he wanted that mace! Jackal Man nervously looked on..things were not going well..he inched closer to the closest spear..hand at ready. Trying to distract and diffuse the situation Jackal Man asked,"Where did you get all of that loot?"…"looks like a lot of stuff you've got there."..Monkian added apparently distracted from his anger,"and that mace…where did you get that mace?"…
Stinkor still wary of the two, and noting spear within easy reach of Jackal Man commented,"Humans!…Human raiders not far from here." Both Monkian and Jackal Man looked about as if expecting human warriors to come pouring out of the dark woods that surrounded the ruins. Stinkor feeling smug,"Don't worry I took care of them". Jackal Man seemed surprised,"you defeated them all??"..Stinkor,"I…overpowered them…then left them for… the Leech!"…both Monkian and Jackal Man shuddered thinking to himself..that foul mutant leech that lived in the swamps…a harsh fate even for humans. Why the master let such a dangerous beast live was beyond their undersanding. Stinkor apparently emboldened with himself then added,"Now let me pass, I must see the master!"…Losing interest in the conversation the two let the mutant skunk through. Both cautiously eyeing the shadows, Jackal Man threw more wood on the fire. Human raiders and…the Leech!... 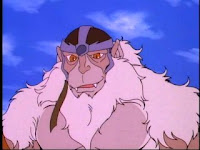 When not using a shield he can move his normal movement speed while in the treetops.

Weapons & Gear: Flail (+7 to hit, damage total is 5d6 +3!!), Studded Leather Armor, Helmet, Projectile-Firing Shield (A creation of Vulture Man, the shield can fire fist-sized rocks that do 1d8+4 damage, long range : 60', can hold 3 rocks before needing to be reloaded).  Sometimes he is allowed to use more advanced gear, although he usually winds up breaking it!
Monkian's Shield 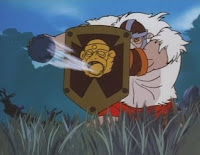 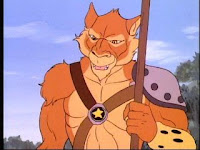 
(Monkian & Jackal Man are converted from the 80's Thundercats Cartoon.  ThunderCats is a registered trademark of Warner Bros.  No copyright infringement is intended)
Posted by Brutorz Bill at 3:54 PM