Darkness engulfed the paralyzed trio…TwoAxe still couldn't believe what had happened, this was no way for a warrior such as he to go down, defeated by …by a Stench! By a skunk beast??! What madness! Stripped of his axes, his father's beloved axes and helpless lying on the damp ground…he could feel the swamp bugs crawling all over him, the mosquitoes gorging themselves on his blood. He couldn't turn his head to see Markus or Hofud, but he knew they were nearby…suffering the same fate as he. Hofud struggled to move, the stinking beast had taken his energy mace! He still wore his flak jacket but it would do him no good to go weaponless in the swamp at night. Weapons!, Demon Dogs! He couldn't even move much less wield a weapon!
He fought his paralysis, sensing he could almost move…almost…his jaw…yes he could tense his jaw a bit..that was a start….Markus lay flat on his back…staring at the heavy dark tree canopy above…a beetle or something had crawled up his nose….he could feel it digging around in his nostril but could do nothing about it…still immobilized from the wretched skunk beasts gas attack.
Sinister red eyes watched the skunk man depart…lurking just at water level in the muck and mud..it waited…three heat signatures now registered nearby…warm tasty and full of life! It would feed well tonite! It moved cautiously, but quickly toward the heat, the warmth! the blood! They lay helpless on the ground before it…ahh yes time to feed!!!!
Markus looked up in sheer terror! Above him was one of the most horrifying beasts he had ever seen, a hulking green creature towered above him…with suckers for hands…and in the palms of those hands a hungry lapping tongue….and that mouth ooh by the ancients that horrible sucking mouth!! TwoAxe! Where was TwoAxe..Could his hero save him from this horror! Markus tried to scream…but lay paralyzed…and died..died a cold..painful...death…a tear ran down the side of his face.
Hofud fought off panic…from where he lay he could see everything that was happening to poor Markus…but the horror spread, not only was the Leech Beast feeding on Markus' blood, Hofud could feel the creature draining his life energy as well…the fiend was some sort of monstrous vampire feeding off blood and drawing away his very life energy without even having to touch him! Hofud struggled…he could blink! Yes his will was strong he could move a finger…fight it..fight it…Hofud would not go down so easily!
TwoAxe knew something horrible was happening…something was near.. something foul and far more sinister than the skunk man. He could feel his life energy draining away…his axes gone…he was helpless…powerless…he would not die in battle as his father had…he had brought shame to his ancestors…he would die here in the cold mud.
With Markus dead and drained of life the Leech turned, still hungry for more…it knew it couldn't hold all of the life energy of these humans, but it wanted it all the same…it leaped upon another warrior…seeking to slake its ravenous hunger…then from the side an attack…one of the humans leaped upon Leech pummeling, kicking biting…
Hofud fought the beast with everything he had…the damned beasts green hide was like rubber…his blows seemed to not affect it at all. TwoAxe felt so weak..Drained of blood and his very life force…he was dimly aware of Hofud fighting the thing…TwoAxe struggled to rise...he must aid his comrade…Markus lay nearby..Dead…and drained of life..poor poor Markus…his only failure was in putting his faith in TwoAxe.  His weapons gone TwoAxe hefted a large rock..a piece of rubble from a forgotten time…a bit of steel metal stuck out of it…using every bit of strength within him…TwoAxe drove the steel rod into the Leech's back…the beast seemed not to notice…not to care…Hofud continued to fight it but he was weakening, more and more every minute. TwoAxe knew he had hurt the beast, but it was drawing on their life force to supplement its own…TwoAxe continued hammering away at the monster…Hofud now lay lifeless below it…The Leech now aware of TwoAxe seemed to just now realize it was even hurt….it rose up and knocked the warrior on his back…locked in mortal combat…TwoAxe threw everything he had into it…it bled from dozens of cuts..Hofud had fought bravely…TwoAxe fought as well…..as everything grew dim…TwoAxe knew he had honoured his ancestors…he would die as a warrior…then darkness overcame him…The beast fed for a time. Drawing the remaining life from TwoAxe…it had been hurt…hurt badly, though it felt no pain. Then finally sated it withdrew…back into the swampy bog from which it had came. 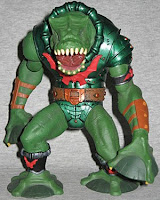 Weapons & Gear: Sometimes Leech uses a heavy crossbow to bring down foes from a distance so it can get close enough to feed. 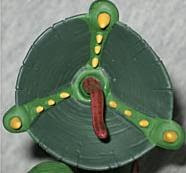 (Leech is a conversion from the 80's cartoon He-Man. He-man is a registered trademark of Mattel, no copyright infringement is intended)
Posted by Brutorz Bill at 12:51 PM