Over on the Savage Afterworld Blog, I found a recent post for Mutant Future; the title of the entry Faker, led me to immediately think it would be a cool write-up about a certain evil, blue-skinned clone of a certain muscle-bound Master of the Universe (sorry I'm a child of the 80's I can't help it)! Well, that’s not what the write-up was about, mind you the mutant beastie Sniderman worked up was quite cool, a mutant mimic-type creature that I’ll definitely be using in my Mutant Future Campaigns, but it wasn’t the old He-Man villain from yesteryear. This got me to thinking (dangerous I know) why not see if I could work up my own Mutant Future version of FAKER. So without further ado I present FAKER.

The cowled figure made its way deeper into the dark recesses of the ancient vault, its gnarled hand gripping an ancient staff of power. Muttering to itself in an evil voice…”The humans must be stopped…too many times have my minions failed me against the humans, I need a better servant, a stronger slave that serves my will and mine alone...This time I will succeed! This time I will create the tool to destroy them all!”…turning down ever darker corridors, scuttling things fled the menacing ones presence, they’d wait for easier prey, and this one was too powerful. The cowled one went deeper into the forgotten compound, machines flared to life, lights sputtered and flickered in a feeble attempt to light the vast room, not that the dark one seemed to care. “So many failures” the dark one looked about at the discarded husks of misshapen humanoid forms that were cast about the vast room…the figure continued purposefully towards a large machine that slowly pulsed to life. “Now this ancient relic holds only enough energy for one last attempt…I must succeed!” The creature’s staff flared to life, bolts of dark energy flared from the ancient staff of power; arcs of power engulfed the machine. Tubes connected to the machine squirmed with a life of their own; they connecting to a dark coffin-like tube which now glowed with the same dark energy as the staff. “Yes…Yes it is working…the Carrinspawn was right, his expertise has proven to be useful after all...This time I will achieve my goal!”Off in the chambers far above, the sounds of a large feline could be heard roaring upon hearing the voice of its master. Minutes or perhaps hours passed and then the machine began a loud hum…the energy faded and with a sinister hiss the tube opened…an eerie mist emerged…strange smells filled the room, but the cowled one cared not, it looked intently at the coffin-like device. Slowly a figure could be made out inside, as the mists receded it stirred, slowly at first then it arose shakily but stronger with each movement it strode into the flickering light of the room before the dark one. It was a large massively muscled humanoid if not for its blue-tinted skin and reddish hair it could pass for a perfect human specimen. Apparently put off by the humanoid’s not quite human appearance the robed one muttered a dark curse under his breath..”so close…so close to success and yet you are tainted, clearly not a pure human in appearance…nonetheless you may still prove useful to me..”Then loudly he spoke with a voice of power and authority,”You will serve me, you are mine..My tool to destroy the humans! You are the Faker!”…with a voice free of any emotion it spoke,”Yes master I will destroy the humans and serve you” and deep in the back of its mind a quiet inner voice added “for now”…. 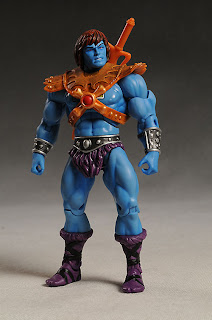 Weapons & Equipment: Studded Leather Armor, furred boots, two-handed sword (+5 to hit, 1d10 +7+3d6 Damage) (or if you really want to ramp things up a notch give him a Vibro-Sword!). Faker may have other basic gear as needed.

Please note, I've worked Faker up as a 1st level character (he's pretty tough even for a level one dude), fresh out of the "coccoon" so to speak.  If you need to buff him up it shouldn't be too hard to do so, just give him a few level benefits and better weapons.  You could also say his master enhanced him a bit by giving him some more hit points if need be.  Good Gaming! - B

(Faker is a conversion from the 80's cartoon He-Man. He-man is a registered trademark of Mattel, no copyright infringement is intended)
Posted by Brutorz Bill at 10:17 PM