Cold eyes watched the Leech depart..Watched it slither away into the muck…watched it shift its mass to squeeze between the submerged rubble that was its lair. He had watched it all; the humans…the skunk beast…the battle and then the feeding. Now he moved…never a fast creature but a powerful one…powerful indeed. Shifting his bulk in the mud and muck he made his way to the shore. Ahh yes fresh raw meat!…just begging to be devoured. Clouds of gnats filled the air, some quite large, but they meant nothing to Tokka…his green hide was thick and his hunger was great. Moss and algae hung from the spikes that covered his shell. His gear would seem odd to the casual traveler, not that this fetid swamp ever had casual travelers. Other than his staff, he wore only a heavy ornate belt, with a few pouches and bits.. but in this belt he carried a masterful sai, and on his back he wore a sheathed scimitar. Both relics he had recovered from a forgotten building of the ancients, deep in the swamp were many old buildings, most destroyed, their contents lost, but in one Tokka had found ancient weapons, ancient armor as well, most was rusted out and ruined but the sai and the scimitar were perfect, so he took them along with an ornate belt from the ancient displays and he used them well. Cautiously he looked about, nothing moved in the shadows around him. Still wary, he prodded the nearest corpse with his staff, a human wearing a torn flak jacket. It was mostly drained of blood, but still tasty. Tokka bent down next to the corpse, lowered his staff beside him and began his task. His massive jaws quickly tore the human corpse to shreds, devouring large pieces of meat in massive gulps. Tokka watched the shadows…never forgetting his mission. The Clan had sent him, he had an important mission. The dark one was here, somewhere within the ruins known as the Bones of Lilith, and the Clan needed to know what the dark one was up too. He would serve them to his dying breath his only will was to only serve the Clan. Tokka would not fail. Finishing his meal..the massive shelled reptile crept off into the night, other than the torn remains of the human, which would be quickly finished off by the swamps other denizens..there was no sign of his passing. 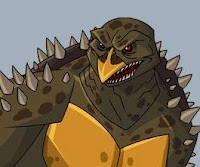 (Tokka is converted from the TMNT Cartoon series from the 80's.  TMNT is Copyrighted by Mirage Studios, no copyright infringement is intended).
Posted by Brutorz Bill at 7:31 PM