This one isn't a cartoon character, instead he is adapted from a short run series by the comics company; Atlas Comics.  The art and info used here has been used with permission.  While looking for Post Apocalyptic goodies awhile back I came accross this series and thought Ironjaw would make for a cool encounter in a Mutant Future Campaign.  Also while Ironjaw is a Pure Strain Human, I worked him up using the barbarian race from the Savage Afterworld blog.  Ironjaw can be used as a villain or hero (or both) depending on the needs of the campaign.

Ironjaw's history is one of suffering and pain. As a baby he was abandoned and left to die. Found by bandits they raised him as one of them. Yet as he matured he found he only wanted to be a travelling minstrel. This only earned him the ire of the bandit band. So to show him that he'd never sing they sliced off his chin and lower jaw with a white hot blade, and left him to die. Found and taken to Soran the Sorceress. Using her mystical skills she saved his life. The minstrel would live, but he would never sing again. Days passed before the minstrel finally awakened. Heavily bandaged, he was not aware of the extent of his injuries. Leaving the cave of the Sorceress, he came across a stream and removed his bandages. To his horror, he discovered that his chin and lower jaw were missing. He returned in despair to Soran's cave. Still weak and distraught over his appearance, he was found by two of the bandits that had originally mutilated him; they attacked him intent on finishing the job that they had started. The sorceress, however, intervened and held the intruders in place with a spell. Soran is not alone however, she had returned with the one called the Forger. He had forged a jaw of iron for the "minstrel". With Soran's sorcerous power the iron jaw is permanently forged to the minstrel's existing bone structure. The entire ordeal awakened a savagery in Ironjaw that lead him on a violent path. He now roams the wastelands, a violent, amoral wanderer who lives only for battle.

Ironjaw often rides into battle on his animal companion a Zunicorn (HP: 48). The Zunicorn differs from the rest of its kind in that instead of a glittery black and silver striped hide it is a grayish white. No doubt this difference is what caused its brethren to drive it out from their lands. The Zunicorn is also not quite as vicious as the norm for the species, at least not with Ironjaw; other folk had best not get too close as many have learned over the years.

Ironjaw is from the Atlas Comics series Copyright © 1975 Seaboard Periodicals. 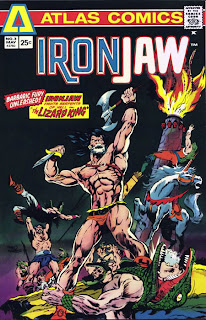 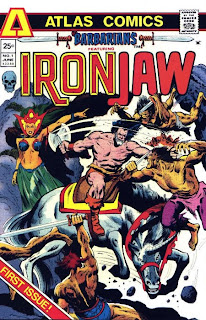