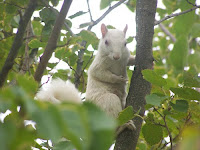 White Squirrels are a rarely seen species of intelligent mutant squirrels, being sensitive to sunlight they tend to stay in overgrown parts of forests or only come out in the open on cloudy days. They use their Control Light Waves ability to remain invisible unless they want to be seen. Some marauders, unknowingly in White Squirrel territory, have found their laser weapons to inexplicably stop working at key moments, not knowing that a White Squirrel was nearby shutting down the laser. These squirrels are sacred to the grens, who value their wisdom and friendship. White squirrels get along with most creatures of the forest and with their telepathy and metaconcert ability tend to know what is happening in their forests. They warn the grens and other beings they are friendly with of any dangers to the forest or the natural order of things. Death Squirrels however, have an instinctive hatred of White Squirrels and hunt them down, killing them whenever they can. Usually the White Squirrels, with their mental mutations and sharper intellect, are able to slip away, being naturally rather skittish anyway, their first instinct is to flee. grens stay out of this conflict saying it is the natural way of things.  One item of note is that Oracle Squirrels have not been reported to dwell in forests containing Scuirinoids.  The reasons for this is unclear.
According to some gren wisemen…in times of great need the elders of the Oracle Squirrels can come together and using their powers in concert can actually channel healing ability that can restore another injured being to health, though the strain on the Oracle Squirrel Elders is said to be great, possibly even fatal to some.

My wife saw the black squirrel entry and said I just had to do a write up for White Squirrels, so this entry is due to her prompting. Enjoy! -B
Posted by Brutorz Bill at 11:09 AM