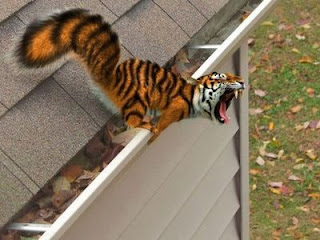 Combine the speed, aggressiveness and bite of a tiger with the agility and climbing abilities of a squirrel and you've got a ferocious package! Tiger Squirrels hunt and act much like their natural tiger relatives, with the exception of spending much of their time in the treetops. They are mostly nocturnal, hiding in the shadows of trees during the hottest part of the day, coming out at dusk to hunt. They prey upon woodland animals, normal squirrels, raccoons, opossums etc. make up the bulk of their diet, but if hungry enough they will attack larger prey. If their night hunt is unsuccessful they will hunt during the day. If more than one is encountered it will either be a mated pair or more likely a female with her young. When her young are present a female will be particularly aggressive. There are some reports of woodland travelers being pounced upon by several Tiger Squirrels at once; coming out of the trees and mauling the travelers, but these have not been confirmed. Most Tiger Squirrels are solitary hunters, or so the sages say…
Posted by Brutorz Bill at 3:56 PM