Shifting gears a bit here, still on a Mutant Future kick, but this one has nothing to do with cartoons, or the 80's.  Goes back a bit earlier.  I actually had this one sitting in my files before I started on Faker, so I thought I might as well share it with you all.  No short story this time. Just a description of what the character is about.  I hope these entries prove useful to you.  As a Gamemaster myself I have learned over the years that having the right villain makes all the difference in a successful campaign, whatever the genre may be.  So hopefully one or several of these villains I've been posting will worm their way into your Mutant Future Campaigns and make your PC's lives miserable!!!

Zora is a mutant human, a "Scientist" infamous for her cruel and inhumane experiments on humanoid subjects to test their "body chemistry". Many of the local mutant folk (referred to as subject tribes by her) are in terror of her. She is particularly brutal to mutant animal humanoids as she considers them to be non-sentient and is especially curious about what "makes them tick". However, she is equally merciless to anyone that winds up on her lab table. She is always on the lookout for biological warfare agents of the ancients to experiment with and unleash on the subject tribes (for some twisted cool diseases written up for Mutant Future check out the Skirmisher Forums ). She has served various warlords over the years, though many learn too late that her agenda is often far from their own. Many an overconfident warlord has wound up as one of her lab specimens. 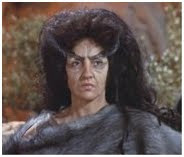