"It's not easy being Green!" A Gamma World Conversion for Mutant Future 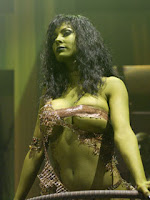 Mutations: None (other than their green skin!)

Grens look like pure strain humans except for their dark green skin. Hair color ranges from brown to green though a few very rare individuals have blonde hair. Grens wear a minimum of clothing, usually something made from leaves and grass.
Though normally peaceful, grens will defend their homes with spears, staves, and other primitive weapons if necessary. They never wear armor or use advanced equipment. They hate and shun ancient technology blaming technology for the world's woes.
Gren communities are often guarded by domesticated animals or intelligent plants. Other community defenses include snares and pit traps, and a few settled tribes have primitive catapults. Grens are remarkably adept with animals and can train even the most stubborn of creatures. This training ability also applies to semi-intelligent plants and funguses. Creatures are domesticated solely for the use of the community and are never kept as personal guardians or pets.
Amongst slavers, Gren females are a hot commodity. Their exotic skin color, yet otherwise perfect resemblance to pure strain human females brings top coin on the slave markets. The pacifist nature of the grens can sometimes lead to a more docile subservient slave this is another thing that puts them in high demand. The fact that they are not pure strains also keeps the Knights of Genetic Purity from caring. For some strange reason female gren slaves are often referred to as Orion Slave Girls, why they are called this is unknown. Male gren slaves are not ever referred to as Orion slaves. Some sages of ancient lore claim that Orion was a hunter in the ancient texts and perhaps this comes from a desire to hunt for the gren women as slaves. Pigmen often stage slave raids into gren territory, although many have learned that while pacifistic creatures the grens are still not easy to capture.
Converted from Gamma World 4th edition. Gamma World is copyrighted by Wizard's of the Coast, no copyright infringement is intended.
Posted by Brutorz Bill at 12:42 AM