The hunched beaked humanoid was bent over a junk filled workbench, muttering quietly to himself. He was carefully working on some bizarre device. Surrounding said bench was a large cluttered room filled with all manner of devices, bits and pieces of wire, computer components, and other sundry odds and ends. Most would call it junk. Flies flitted about the room, no doubt attracted to the buzzard man's foul smell, he had no time for bathing, he had more important things to do… A forgotten half-eaten meal lay on the end of the bench, maggots wiggled about happy to finish it off.
Then without warning a voice rang out…a voice of power, authority and malice.."CarrinSpawn!"…the buzzard like mutant cringed…he knew that voice…only one called him that…and while he was no doubt descended from the same vulture stock as the Carrins of the desert wastes he was clearly no Carrin. It mattered not, one did not argue with the Dark One! How did he get inside this time?? After the last visit, he'd spent days fine tuning his workshop's sensors, he should have had ample warning of this visitor way ahead of time.. and yet here he was…again..the mutant bird eyed the nearby Mark V blaster for a moment, then kicked himself for disassembling it earlier, it was no use to him in its current condition, not that he wanted to fight this particular visitor anyway, a fight with the cowled one could only have one outcome…Shuddering the vulture man slowly turned to face his "guest" He kept one eye closed, as if that would somehow shield him from whatever was about to come…
Before him stood a tall well muscled figure, he or perhaps "it" would be more appropriate, bore an ancient staff of power, and clenched it tightly in a gnarled hand, the skin of which shone a sickly purple in the workshops artificial light. A heavy cloak covered the dark ones face, although there was no missing his glowing red eyes, eyes that seemed to burrow into Vulture Man's very soul.
Feebly the mutant carrion bird spoke,"Yes…uh..um..how may I serve you oh powerful one?"…
He kept one eye closed and now squinted with the open eye, cringing all the while. He feared what would come next….but sudden painful death didn't come. Vulture Man opened his eyes a bit more. The dark one reached into his purple robes and pulled out a large bag, he carelessly tossed it to the floor right in front of the foul smelling buzzard man. The mutant bird jumped back fearful of some foul horror emerging from the bag to rend him feather from limb. But instead the bag spilled open and dozens of mini fusion cells spilled out across the floor, a small fortunes worth! Greed quickly overcame his fear, there was enough power here for him to complete several projects and perhaps start a few new ones he'd been dreaming about. Then he remembered his "guest"..Looking quizzically at the dark one he waited.  Beneath the purple cowl it spoke, eyes still glowing red with an unwholesome power,"You have served me well Carrinspawn, for that you may continue to live." Vulture Man was confused, relieved but confused. The dark one spoke again,"Consider this to be a payment if you will, your work has proven to be beneficial to me, be prepared for when I call upon you again!"…Vulture Man looked down at all the power cells, not able to believe it, and then when he looked back up… the dark one was gone, as if he vanished into thin air. He quickly gathered up the power cells, wiping the sweat from his brow. "Not what I expected…not what I expected at all"…then he remembered his earlier meal, reaching over he took a big bite, licking the squirming maggot that had managed to escape onto his beak. "Oh well, back to work…" 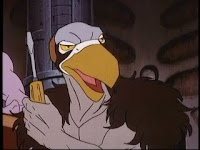 Thundercats...Hoooo!!
(Vulture Man is converted from the 80's Thundercats Cartoon. ThunderCats is a registered trademark of Warner Bros. No copyright infringement is intended)
Posted by Brutorz Bill at 9:03 PM