Well seeing as how my Mutant Future Cartoon villain series seems to be popular not to mention I'm having a blast with it, I've done another one.  Notice I've now dropped the "Lame" part, after Eli & Mik felt I was incorrectly categorizing some of their beloved 80's villians as lame.  So how about one that just Stinks!??

TwoAxe, led the small but rugged band of human raiders deeper into the ruins. It was dangerous to be this close to the swamplands, especially so close to dark, but Markus knew to trust TwoAxe. Ever since the dual axe wielding warrior had saved him from the Spidergoats, he'd learned to never doubt the warrior's strength and wisdom, he owed him his life. Hofud the Grim looked about buttoned up his flak jacket and gripped his energy mace a bit tighter; it was the ruins that concerned him the most, the Bones of Lilith a dark ruin of the ancients was said to be the lair of all manner of foul mutant beasts. Still they trod on. Markus swatted at the growing cloud of gnats and bugs that only got worse as dusk approached. They'd need to make camp soon and start a fire.

As night approached ever closer, yellow eyes watched the group intently, thinking to itself…."humans this deep in the wilds!, exploring the ruins, the master has claimed these ruins as his own! The master must be told, the master must be warned! but first…." the furred mutant stealthily made its way through the ruins, circling around he uncannily knew the direction he was going in relation to the intruders. Finding the perfect spot, the black and white furred mutant lay in wait until the time was right.
TwoAxe didn't like this, didn't like it at all. His band wasn't equipped to deal with the denizens of the swamp at night; the elder had given him a bag a glow cubes, so what? So that they could see clearly whatever mutant beast was going to devour them? Markus was blindly following him as always, should have left the fool to the spidergoats, but his sister would have never forgiven him. Hofud was a good man; he knew what dangers they faced. Snapping himself to alertness, TwoAxe knew something was wrong, they weren't alone!
Without warning out of the near darkness a black and white furred humanoid attacked, not with tooth and claw, not with blade nor bullet, but with something TwoAxe was totally unprepared for…
A horrific stench filled the air, apparently it emanating from this beast! A skunk! A large mutant skunk in the shape of a man!! TwoAxe tried to charge the beast, raising his axes in challenge, but the smell was too much…overpowering…no…no..not this way…TwoAxe dropped one axe, then the other…soon he was lying on the ground immobilized watching the events happen around him. Hofud wasted no time launching his attack, he saw TwoAxe fall, some beast had ambushed him from out of the shadowy ruins and attacked! Hofud saw no weapon, the beast had used some attack on the mind no doubt, Hofud had fought such mindwitches before he had a strong will, he'd survive…energizing his mace Hofud charged! Then ran smack into a wall of….STENCH! Hofud gagged, staggered, he was overwhelmed…not a mind attack but an attack on his very senses, his sense of smell. Hofud dropped his energy mace, it fell to the soft muddy ground now useless to him. The valiant warrior tried to fight off the smell…tried to attack the skunk beast, but soon he too was lying on the ground beside TwoAxe…Which left only Markus…in shock Markus saw his hero fall, TwoAxe was on the ground!!! How could this be?! Perhaps had Markus been a different man he would have fled, and survived, but Markus wasn't a coward, call him many things but he was no coward, and he owed TwoAxe his life! Markus, not wasting time to load his crossbow, drew his sword and charged…screaming his war cry he launched an attack on the yellow eyed mutant beast that had downed his comrades, his hero! Markus brought down his sword on the skunk man, but at the last possible second the foul smelling beast raised its own shield, a strong shield made from the metals of the ancients. The blow, came up short glancing off the shield…then Markus was hit by the smell…a wall of stench engulfed him…his eyes watered….he gagged…struggling to hold his sword he swung again…but he was too weak from the smell…he dropped and joined his fallen comrades on the ground.
Stinkor looked over his handiwork…pleased with himself; he began looting their bodies, searching through their gear…a bag of strange cubes? Odd….a mace of the ancients and other items! The dark one would be pleased, no doubt most of the items would wind up in the buzzard's workshop, but it mattered not, the buzzard man had made the very breather he now wore, as his stench power had grown over the years Stinkor found even himself affected by it unless he wore the special mask and harness. Stinkor pondered for a moment, should he finish off the humans? They weren't dead, merely immobilized for a time by his stench attack. Looking about he realized he was not alone, something stirred in the nearby swamp…no he'd leave the humans…they'd be encountering true terror and agonizing death soon enough…Stinkor quickly stalked off into the ruins to find the Dark One. 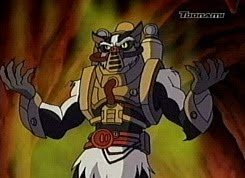 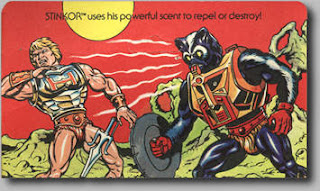 (Stinkor is a conversion from the 80's cartoon He-Man. He-man is a registered trademark of Mattel, no copyright infringement is intended)