Well it's Wednesday and you know what that means!!  It's Word Verification Wednesday!
Eli has once again beat me in posting his critter first, Oh well the more mutants the merrier! Anyways my entry is sort of a tribute to the Planet Algol blog.  I love the old school pulp stories and games that use unusual skin color humans and Algol definately has that! So I thought I'd work up a race of Zebra-Men for folks to add an unusually skinned race to their Mutant Future Campaigns.  The Cherotti also have a healthy dose of inspiration from a certain Heavy Metal Magazine Cover that was a favorite of mine in my youth! 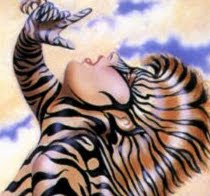 The Cherotti are mutant humans with zebra-like striped skin. For this reason, they are called Zebra Men by other peoples. They find the term Zebra Men to be demeaning and prefer to be called by their proper name Cherotti. They are amazing scouts and guides, their innate sense of direction and ability to influence potentially hostile animals puts them in high demand among other races for this role. Also with their high charisma they make excellent diplomats, especially when trying to negotiate with more primitive peoples who respect their wilderness abilities.
Cherotti possess an intense sense of wander lust, they seldom stay in a given area for an extended period of time. They are always wondering what's over the next hill. Slavers that have managed to capture Cherotti find they do very poorly in captivity and will eventually sicken and die if kept penned up in an area for an extended period (1d4 months). Cherotti culture has many similarities to Nomadic Native American tribes of the time before the Ancients. They travel light and move about with the seasons.

Cherotti are quite proud of their stripes, to outsiders the stripes look the same, but for the Cherotti each person has their own unique and individual stripe patterns. They prefer to go lightly clothed and disdain heavy armor and gear that obstructs their stripes. It is partly for this reason that they prefer to avoid colder climates, but they can and will venture into cold areas, particularly if they think there is something interesting to see there. They have no issues with using ancient technology, as long as it is light and easy to carry. 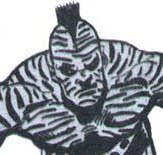