Let's get Transdimensional....(Resources for Mutant Future)

I need to be out finishing my Christmas shopping, but I'm ailing with a lousy cold. So here I sit thinking of all the things I need to be doing.  Christmas sorta snuck up on us this year, we've been putting in some major time at work the past month and I just realized..."Oops Christmas is upon us!".  Wish I could somehow zip back and get a day or two to finish some things.  Which got me thinking, dangerous I know, of a cool game book in my RPG library.  I've already mentioned After the Bomb and it's adventures elsewhere in my blog.
Another nice book in the TMNT RPG line-up is Transdimensional TMNT. 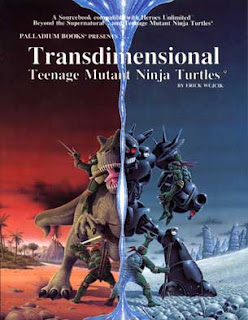 This book is also by one of my favorite game designers/writers Erick Wujcik.  The book has some interesting rules for time travel and even gives a few brief write ups of some other times/settings.  Might give you some ideas for that player who loves to Plane Shift on ya.  Have him appear on a skull covered plain facing off against a battle mech or a T-Rex and he might not be so eager to plane hop away from your Mutant Future monsters.  This book also contains additional mutant animal types, but these aren't just any animals. No they are prehistoric beasties!  Dinosaurs, Smilodons, Mammoths and other cool beasties. Want to work up a sentient gun-toting Raptor Commando! It's in there!  I could see maybe having a secret lab of the ancients somewhere in your Mutant Future Campaign that's been experiementing with Dino DNA to create super-soldiers.  Maybe the base is discovered by your players or someone else, or perhaps a earthquake has allowed the base to be uncovered and now some really interesting new prehistoric players are in town!
Well in reviewing the time travel rules, I see if your not careful you could get pretty jacked up! Potentially devolving or evolving (into some kinda alien grey lookin thing), so I guess I'll put my time travel machine back up in the attic, load up on vitamin C, bundle up for the cold and go fight the holiday crowds.
Good Gaming!
Posted by Brutorz Bill at 10:09 AM