Whew what a day....survived the Mall..shudder...still not finished shopping though...shudder..
Anyways thought I'd do a follow up to my earlier post.  There are a couple of additional resources out there for those of  you looking for Mutant Dinosaurs a la TMNT style. 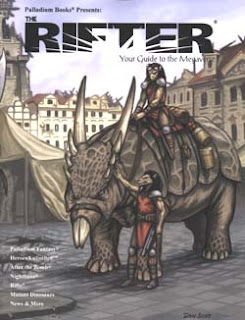 Rifter #23
This one has an article featuring several dinosaurs worked up with the whole TMNT Bio-E format. Some duplication of dinosaurs from Transdimensional exists but these are done for After the Bomb 2nd. ed. I have seen where some folks have complained that the dinos weren't tough enough in this article, but that can always be tweaked by the GM anyways. 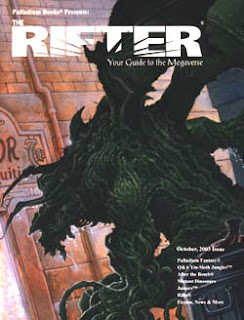 Rifter #24
This is the follow up to the previous Rifter dinosaur article; describing Mesozoic Land. This is a pretty cool setting, imagine Jurassic Park but the dinosaurs are done up TMNT style.
Posted by Brutorz Bill at 4:59 PM