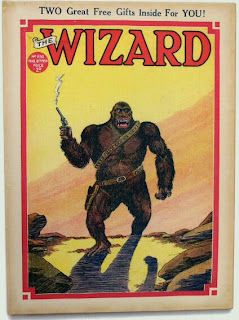 Found by a kindly relic seeker as an infant babe, the relic seeker, who only went by the name of Johnson raised the mutant gorilla and named him O'Neil. Johnson, was a kind man, and treated O'Neil very well. He also taught O'Neil how to survive in the wastelands. He taught him how to cook and clean, and most importantly how to be a crack-shot with a revolver.
Johnson and O'Neil had a good life, tough but good, that is until one day when O'Neil was out hunting, Johnson was murdered for what he knew about "the great mother lode," O'Neil set out on a path of vengeance. O'Neil strapped on a bandolier, two six-shooters and tracked the murderers across a hundred miles of mountains and badlands. He picked them off one by one, meanwhile discovering he has a talent for banditry. He is given the nickname Six-Gun Gorilla. He was last seen just north of Madge Canyon apparently "working" the trade traffic in and around BarterStation, Guntown and Rockwood.

Based on the character Six-Gun Gorilla featured in the 1939 pulp, The Wizard.

Thought this guy was just too cool of a concept not to work up for Mutant Future. While not really evil, he could be holding up trading caravans cause he doesn't know what else to do, then there is the whole "mother lode" out there that could make for a great plot hook. -B
Posted by Brutorz Bill at 8:52 PM