It came to me in a dream….from far away…a world away…they lived…they fought…they died…they were the last, their way of life dating back to the time before time. They followed the path of honor...the code of the warrior. A code that was ancient when the ancients were young. Here they lived, in an isolated forgotten land, honing their art, their martial prowess to a razor’s edge. Few in number…once there were more, but then the machines came. These machines had been tools of the ancients, tools of war. For the ancients had forgotten the code, the true path of the warrior. Instead they forged machines to fight their wars for them. That was their downfall, for a true warrior fights his own battles, faces his own demons. And whether he wins or dies, he follows the path of honor. The ancients forgot the true path. And their machines, their tools punished them for their transgressions. Now the ancients were gone, but the code remained, the code of Bushido. And these remaining few held true to this code, though their ancestors had once been kept in cages for the amusement of the ancients, they survived when the ancients failed, they achieved new heights of awareness, of honor. They would face the enemy who had no honor with honor; they would fight to the bitter end, for they were the Simian Samurai! 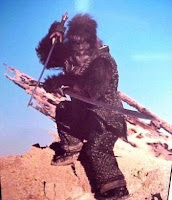 Well if you're still reading this, then I must have sparked your interest. This  is a work in progress on a Mini-Campaign Setting specifically with the Mutant Future game rules in mind, but with minimal tweaking it could also be used for other similar Old-School style games. 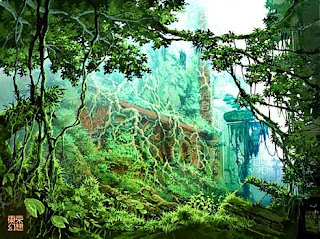 I recently had a very unusual dream. The dream was quite vivid and quite memorable. It basically was me observing "someplace else", the someplace being what seemed to be a forgotten land somewhere amidst the post-apocalyptic ruins of Japan. The civilization of mankind had fallen, apparently a victim of its own ignorance and violent ways, but Civilization continued on…Apes had gained sentience, how wasn't explained, but they walked more upright than their ancestors, dressed, and used tools. These different species of ape lived and worked together struggling to survive in this new Dark Age. Of particular interest was that some of these apes had adopted the ancient ways of the Samurai. The apes however were not all in agreement, indeed different groups had different agendas, some vied for power over the rest, others sought to hold the mutant beasts at bay and protect their people, while others were somewhere in between. But these simians were not alone. The dark legacy of the ancients still lurked, not only were foul mutant beasts and the degenerate descendants of man to be found in the ruins and wilderness outside of their communities but something far more dangerous existed. The machines still stirred…The robot armies of the ancients still existed somewhere out there…and still hungered for war.
More to come... -B
Posted by Brutorz Bill at 9:39 PM