Planet of the Last Simian Samurai; The Hai Nu 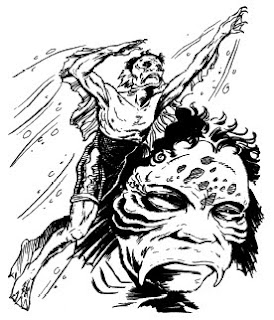 The Hai Nu is a race of mutant humans adapted to an aquatic lifestyle. They are generally passive creatures, but can be dangerous if provoked. They will vigorously defend their hunting grounds and communities, fighting to the death if necessary.
They have lean solidly muscled bodies that are covered in a soft fur that comes in differing shades of green, blue and yellow. They have webbed hands and feet, with short claws extending from their fingers and toes. Bony ridges encircle their sunken black eyes. They have rows of thin gill slits, extending along their necks. Hai Nu can breathe underwater without difficulty, and while they can breathe and filter air they do have difficulty engaging in strenuous activity on land for extended periods thus they limit their surface activities to short tasks. They live in warm, shallow seas of tropical and sub-tropical areas often making their lairs in the wrecked ships of the ancients. It is usually when surface dwellers are seeking to loot such vessels that confrontation occurs between them and the Hai Nu. However, the Hai Nu do love bright treasures, particularly gems and statuary and are expected to make regular tribute to a mysterious being known as the Sea Lord, if they don't have proper tribute for him, in desperation, they may raid passing ships (Simian or otherwise) in order to steal cargo to give to the Sea Lord, though they never attack to kill, if at all possible, during these raids. The relations between Hai Nu and the various Simians vary. Only those apes that sail upon the seas that are home to the Hai Nu really even encounter them, and then only rarely. Unfortunately other species of fishmen that also reside in the waters of the Hai Nu are not so peaceful; the Barracuda Men in particular frequently attack the surface dwellers. To many simians all the fishmen are the same and they group the Hai Nu with these other more vicious fish folk.

Adapted from MC 6 Kara-Tur Appendix by TSR. No copy-right infringement is intended.
Posted by Brutorz Bill at 2:23 PM