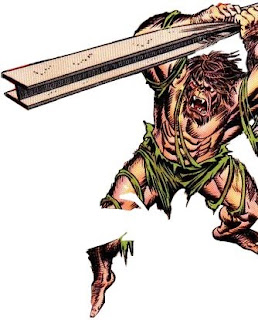 Str: 20 (+4)   Dex: 16 (-2 AC)  Mutant Homo Erectus
Con: 17         Int: 7                   Alignment: Neutral
Will: 11         Cha: 8                 AC: 6 Hit Points: 162
Mutations: Increased Strength (+3d6 damage), Gigantism (9' tall, +1 damage dice), Increased Constitution (+2 vs. poison)
Weapons & Gear: Skins, Furs, Large Club (1d6) (totals 5d6+4 with club) yikes!!!
Little is known about Armak's background, he is apparently a mutant Homo erectus. According to camp fire tales he was once a normal human named Arnald who fell victim to Brain Lashers, they used their Ancestral Form mutation to de-evolve him to a cave man state. He was brutalized and mistreated by the Brain Lashers for years, until a Homo Erectus Lord named Lok-eye led a rebellion against the Brain Lashers, Lok-eye (with help from a nearby Entiog tribe) was able to defeat and drive away the Brain Lashers, that unfortunately is when things only got worse for Arnald. Lok-eye made the Brain Lasher's Homo erectus slaves into his own minions and began to eye the lands of a nearby group of Pure Strain Humans; they were Thorites, worshippers of the ancient god Thor. Time and again the Thorites had defeated Lok-eye's dim witted Homo erectus minions. Seeking a stronger minion, Lok-eye began to experiment on his followers many died, but Arnald lived, he mutated and found himself much stronger and tougher than ever before, though his already shattered mind was even more fragmented, he somehow had come to believe that he was Armak the First Man, the original cave man if you will. Initially he served Lok-eye but after getting a major beating by the Thorites (he fell from the top of an ancient structure of the ancients, and would have died if not for his mutant constitution), he fled into the wilderness. 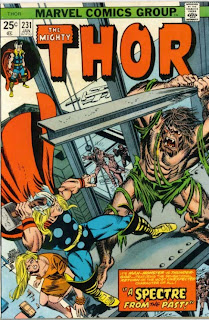 Armak is very loosely based on the Marvel Comics villain Armak from Thor #231.
Posted by Brutorz Bill at 7:14 PM