I Defied GOMDULLA The Living Pharaoh!

In doing research for my recent Gorlion post and another upcoming beastie I found a pretty wild (some would say silly) monster. I first came across this beastie many years ago in the pages of Dragon Magazine (oh how I miss the old Dragon mag. coming to my mailbox on a monthly basis *sigh*); anyways the monster was statted up for the Marvel Super Heroes RPG (now called FASERIP I believe). Back then there was no internet and I had a habit of using (scavenging) everything I could find for my games so I converted it to my AD&D campaign. My players loved it, well until it trounced half the party (very close to a TPK, they assumed it was "just" a giant mummy). I've long since lost those gaming notes, but Labyrinth Lord is so easy to use I decided to convert this monster to that system.

So without further ado I present… 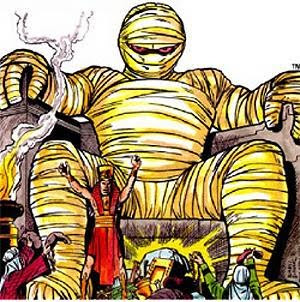 No. Enc.: 1 (Unique?)
Alignment: Chaotic
Movement: 90'(30')
Armor Class: 3
Hit Dice: 12+3
Attacks: 1 (fist, or telekinetic attack)
Damage: 6d6 fist, or 3d6 telekinetic boulder attack
Special Attacks: Telekinesis (using a special form of telekinesis he can mentally hurl rocks up to a range of 120' for 3d6 damage, he can also use this ability against living creatures but they are entitled to a save).
Save: F12
Morale: 12
Hoard Class : XVIII +5,000 gp, also if your campaign allows for ancient tech items, this is a great place to put them!!
Special Abilities: unaffected by Sleep, Charm, or Hold spells. May only be harmed by magical weapons, spells, and fire based attacks (energy weapons dull full damage!). Levitation 3x per day as the spell.

Optional : Gomdulla does have a weakness, in addition to being rather slow moving, on one of his feet, hidden deep beneath the layers of bandages is a small stud, which if pressed will render him immobile and put him in a stasis-like state.

In a forgotten corner of a lost desert lies a ruined ziggurat, somewhere deep inside an ancient evil slumbers… 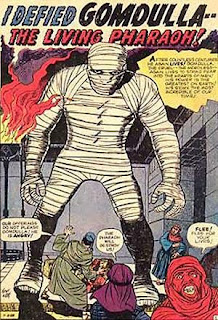 There is much speculation as to what exactly Gomdulla is. It appears to be a 20' tall giant humanoid wrapped in ancient wrappings like a mummy. Legends say Gomdulla came from another world and found the air of this world burned his skin, so he wrapped himself in special wrappings to protect himself. While he has some of the immunities of traditional mummies, he does not have their mummy rot attack ability. Nor has he ever been successfully turned by a cleric. Some sages have speculated that Gomdulla is not a living or unliving being at all but is in fact a construct (Robot) from another world sent here to conquer. Others have called him a mutant noting his abilities of telekinesis and levitation ,as well as, his size and the fact that he has only three fingers and a thumb on his right hand yet has four fingers and a thumb on his left hand.
Have fun with this one! If I get to run a Planet Algol Campaign I may just have to use this guy.  Maybe the party is in dire need of some Radiation Crystals or other hi-tech treasures, sounds like they need to seek out The Ziggurat of Gomdulla! Also I haven't done the stats, but Gomdulla would fit in just fine in an Encounter Critical game. Course you could just make him a giant mummy for your regular fantasy games, but I like to insert the unexpected and unusual in my games.
Good Gaming! -B

Gomdulla is copyright Marvel Comics and first appeared in Journey into Mystery I#61/1 (October, 1960). 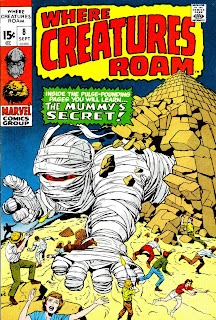