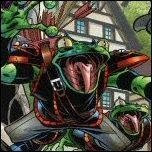 Frog Soldiers are humanoid roughly man-sized frog men. They are usually equipped with leather armor and weapons of average quality (depending on their master and their mission). Frog Soldiers are often used as cannon fodder in the armies of evil overlords. Their low intelligence precludes them from engaging in missions requiring any sort of critical thinking and they often even bungle the simplest of missions. They tend to rely on sheer numbers to get the job done. However, this tactic can be disruptive as the Frog Soldiers often get in each other's way or interfere with the actions of other allied forces. Tactics is not their strong point.
Dragons consider Frog Soldiers to be quite tasty, and many a Frog Soldier unit has been routed at just the thought of a nearby Dragon on the loose!

In the Tellos comic series the Frog Soldiers were often more for comic relief than a real threat to the heroes.

*Update* 4/26/10 Upon reflection and a bit of playtesting I believe the double damage hop attack is a bit much for what the beasties are intended to be. Instead for a Hop Attack, I think I'd give them a +1 to hit and +2 to damage. I'll leave the original info in place for those who want to have a little more "oomph" in your frog soldier encounters. -B
Posted by Brutorz Bill at 10:25 PM