As I posted last night I got the new Post Apocalyptic RPG; Atomic Highway.  I got to actually sit down and read it for a bit. I decided the best way to get a handle on it was to make up a character. So below is my very first character made for Atomic Highway.  Creation was quite easy. So without further ado I present:
Righteous Rude 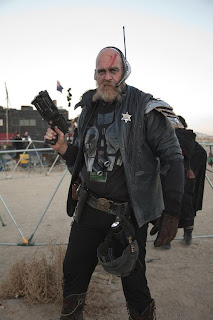 Gear: Binoculars, badge, flashlight. He has some sort of communications headset, and at times is seen talking into it. Who he is talking with is unknown, some claim it doesn't work and he is simply insane, others say it is his home outpost and he is gathering intel for a big raid. Still others claim he is talking to a network of Law Dogs working together to bring law and order back to the Wasteland.  No one knows for certain and Righteous Rude isn't telling.
Very little is known about the Lawman known as Righteous Rude. It is believed he grew up far beyond the known bartertowns. Some claim he grew up in a military outpost of some sort. What happened to his people is unknown, what is known is that it apparently wasn't pleasant and Rude has been in a bad mood about it for many years! He showed up one day wearing a badge and has gone about for many years enforcing the law, or at least his version of it. He does have a code of honor, but you don't want to get on his bad side.
Posted by Brutorz Bill at 8:31 PM