I've gotten a couple of requests for this one, Trey over on From the Sorcerer's Skull blog in particular expressed an interest, so without further ado I present: 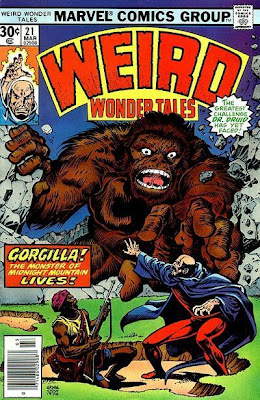 Gorgilla The Monster Of Midnight Mountain
No. Enc.: 1 (Unique Beast)
Alignment: Neutral
Movement: 150'/50' (when charging he can leap 60' upward or across) Swim 120'/40'
Armor Class: 3
Hit Dice: 18 +3
Attacks: 3 (clubbing fist/clubbing fist/bite) + see below!
Damage: 1d10 +10/1d10+10/3d4 (+ see below)
Special Attacks: Rending (if Gorgilla strikes his opponent with both hands he does an additional 1d12 points of rending damage). If Gorgilla charges and strikes, he has grappled with the opponent, and there is a 50% chance it has been overborne. Such overbearing inflicts 2-16 points of damage and enables Gorgilla to automatically inflict biting damage as well. Against small foes (7' or less) he can attempt a stamping attack, each huge foot inflicting 5d4 crushing damage. Gorgilla is able to uproot trees of up to70' height, 6' or less diameter and use them as a club or even a battering ram to knock down barriers.
Save: F18
Morale: 12
Hoard Class: None (course you could always put some cool stuff in his lair, but treasure tends to not interest him).
Special Abilities: Keen senses (surprised only on a 1), Rending attack (see above), Stamping attack (see above), Overborne attack (see above).

Gorgilla is a 24' tall half-man/half-ape living in the wilderness far from civilization. According to some he is smarter than the average ape, and has been reported to exhibit an almost human-like intellect. He is savage when angered and attacking him would be a most foolish endeavor. There are those that have reported being helped by him. There is a tale of a group of adventurers that sought out Gorgilla in the hopes of capturing him for a wizard's unknown purposes. They instead encountered a fearsome Tyrannosaurus Rex, and would have surely perished, had not Gorgilla appeared and attacked and killed the fearsome predator. In gratitude the adventurers left Gorgilla alone and returned to the angry wizard empty handed. Others have reported seeing Gorgilla far out to sea swimming effortlessly, a group's sea vessel was attacked by a ferocious sea beast and Gorgilla swam up and slew the beast, then swam away. Few sages give any credibility to these wild tales. Some sages have speculated that Gorgilla is the result of some magical experiment that has escaped into the wilds. Others say he is a mutant beast, which gained its height and intelligence from strange radiations. Still others say Gorgilla is the missing link from the past dating back to the time of the ancients. No one really knows for sure… 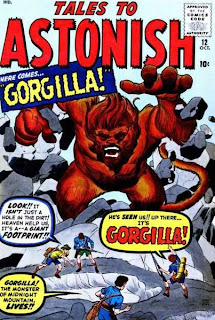 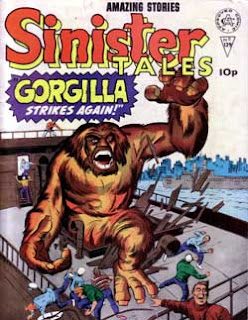 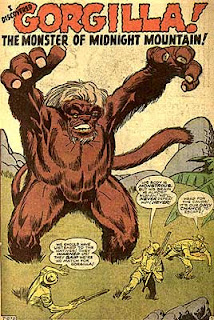 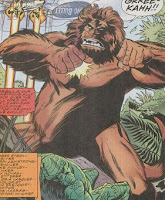 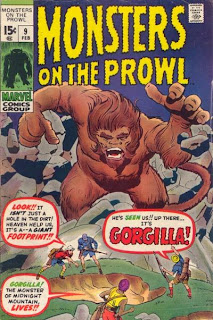 Please note I HEAVILY based this write-up on the AD&D Module WG 6 Isle of the Ape; Gargantuan Ape write-up by Gary Gygax!!! I know many folks don't have access to that old classic adventure so I used it to work up Gorgilla. I just didn't want anyone to think I'm taking credit for work originally done by the master himself. -Good Gaming
Posted by Brutorz Bill at 1:59 PM