Gruto the Creature from Nowhere!

I seem to be on an old school giant Marvel Monster kick lately. Dave B. was kind enough to send me a link to some more beasties from that bygone era and requested that I work up some more. So I chose Gruto for my next write-up. 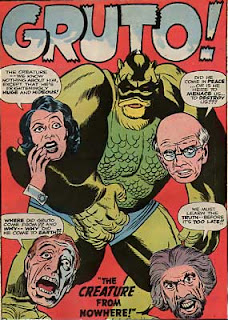 Gruto the Creature from Nowhere

No. Enc.: 1 (on his homeworld/plane greater numbers of his species will be found)
Alignment: Lawful
Movement: 120'(40')
Armor Class: 4
Hit Dice: 9
Attacks: 1 (slamming fist, he will only use this attack in dire emergencies of self defense or to save another, he abhors physical violence, preferring to use his hi-tech devices to avoid confrontation.)
Damage: 2d8 (fist)
Save: F8
Morale: 8
Hoard C lass: (usually only carries his Paralysis Rod and Hologram Emitter on his person, in his ship all kinds of cool tech can be found, nothing of a harmful offensive nature however, XVIII is a good starting point replace magic items with tech equivalents).
Special Abilities: He has several hi-tech devices that he can rely upon.
Paralysis Rod – the rod functions as a wand of paralyzation.
Hologram Emitter Crystal – When activated this duplicates the effects of the Mirror Image spell, creating 1d4 duplicates of the user that will last until attacked or 6 turns have passed. It will take 6 more turns for the device to recharge in order to be used again. The Crystal possesses charges like a wand.

Gruto appears as a 12' tall massively muscled green scaled humanoid. His people are peaceful and good. Long ago they discovered advances in technology (or magic if that's how you roll) that enabled them to better themselves and their society. Gruto was chosen by his people to journey to other worlds and share this knowledge for the betterment of all. Unfortunately his vessel was damaged during transport and he has crashed in the wilderness. During the crash he suffered an injury which has caused him amnesia. Still a good and lawful being he doesn't remember who he is or why he is on this strange world. Locals have seen him and assuming he was a horrible monster reacted in fear. Gruto has fled deeper into the wilds, lost and confused. 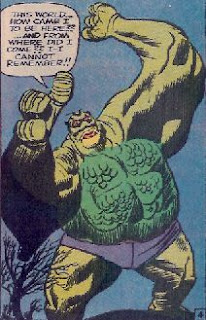 Christian did a recent post in his Destination Unknown blog about violence in RPG games, I chose Gruto with that post in mind. This encounter is meant to be all about "not all is as it seems" and players shouldn't base their characters actions solely on appearances. While violence could be used to "stop" Gruto, that is the wrong approach for this encounter. Gruto could be a great potential ally to a party. If they can help restore his memory and help him get back to his crashed ship, he can repair it and would no doubt be grateful and reward the party with some cool stuff. However, if they attack him they have missed a great opportunity. Perhaps some locals spotted Gruto, assumed he was a horrible monster (mutant troll?) and have begged/hired the party to get rid of the beast. To be extra challenging you could even say Gruto's devices give off an aura that inhibit detection spells and such so that Know Alignment and detection magics don't work on him. Gruto is presented as an alien with hi-technology, you may not want to go that route for your Labyrinth Lord games, so simply make him a dimensional traveller who used magic instead of technology.  I wanted to stick close to the original creature as presented in the comics so I kept the tech in.  I plan on using Gruto in that Planet Algol Campaign that I've been wanting to run.  : ) 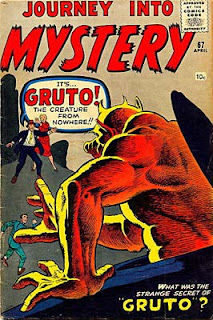