Well its Simian Saturday once again, Thanks for all the great comments on the War Chimps I did last Saturday. I figure you can never have enough Ape-based beasties to choose from for your gaming fun, so being a big Jack Kirby fan, I worked this one up for your party slaying pleasure!
The Gorlion; one time foe (ever so briefly) of Dr. Druid. 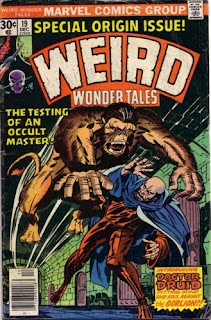 Gorlion
No. Enc.: 1 (1d6 rarely)
Alignment: Neutral
Movement: 150'/50' (+ can Leap for 30')
Armor Class: 6
Hit Dice: 6
Attacks: 3 (Claw/Claw/Bite)
Damage: 1d4/1d4/1d8
Special Attacks: Rending (if the gorlion strikes its opponent with both hands the beast does an additional 1d8 points of rending damage)
Save : F4
Morale : 9
Hoard Class : Usually have no personal treasure but are often guarding the treasure and lairs of other more powerful beings (especially sorcerers). If guarding another creature's treasure use appropriate Hoard Class for that creature.
Special Abilities: Keen senses (surprised only on a 1), Leaping attack (if there is enough room can leap for 30'), Rending attack (see above).

The Gorlion is part ape, part lion. Whether these are sorcerous hybrids (like Owlbears, etc.), otherworldly beasts or mutant monsters is unknown. What is known is that they are fearsome foes and exhibit an uncanny cunning not normally found in such savage beasts.

I can see several uses for these beasts, first off they'd make for a cool guardian beast in a sorcerer's lair, sure it's a repeated theme, but it works, plus the party might not be totally surprised by an Ape guardian, but one that is a mixture of ape and lion now there's a surprise. Add in their fast movement and leap attack that will quickly nullify the party's ranged attacks and you've got a group of adventurers in potential trouble quickly, especially if the Gorlion makes some good to hit and damage rolls (claw,claw,bite …REND!). They could be used in this way in "regular" fantasy RPG's (Labyrinth Lord), or other OSR games, Planet Algol etc. You could also do the Gorlions as mutant beasts in your Mutant Future Campaigns, maybe a whole pack of them to make things interesting.
Posted by Brutorz Bill at 12:25 PM