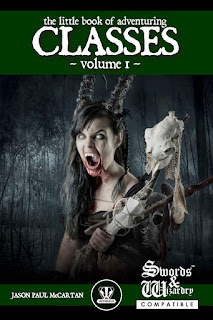 I recently picked up The Little Book of Adventuring Classes - volume I-
It is a fun little OSR product stat'd up for the Swords & Wizardry Complete system, but easily adaptable to your OSR system of choice. The cover features my favorite class from the book the Deathwitch! It has 8 new classes and 5 new races. While I don't see myself using every race and class in this "little book", the ones I like, I really like and right now with it being Christmas in July you can get the PDF for $2.24  also if you are more of a print "book in hand" sort of person (such as myself) it is now available in print.

Posted by Brutorz Bill at 9:07 PM No comments:

My recent Gamma World post got some great feedback, and got me thinking D&D is fun, but I need more mutants, guns and lasers in my life, uhmm I mean my games!
I see the Gamma Knights supplement is available in print now, over on DrivethruRPG, I didn't really use the Gamma Knights supplement that much in my Gamma World Campaigns, it has some rules for incorporating power armor into your games and also includes a boardgame option (which I never played). I am encouraged to see this in print however, in the hopes that eventually the entire Gamma World library will be made available again in print, many of my treasured Gamma World books are literally falling apart and look like they came straight from the apocalypse. 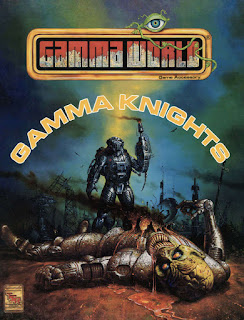 In other news, while I haven't posted about minis in awhile, I love collecting and gaming with miniatures. Post Apocalyptic miniatures (especially weird mutants) can sometimes be a challenge to find, I recently spotted some cool 28mm miniatures over on the Badger Games site.  Some cyclopean gun toting warriors (Clopsen Troopers) 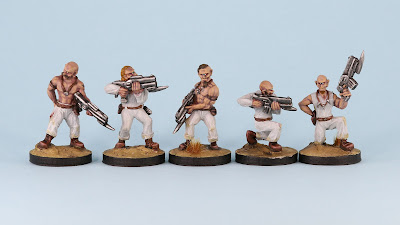 These would be perfect for some mutant warriors or could be great to use at Kermen if you are playing Gathox Vertical Slum. In fact I can see using Gathox with Gamma World, a mobile giant slum slowly walking across the wastelands. Could make for a really fun and interesting location in your Post Apocalyptic Campaigns.
Oh and the Post Apocalyptic Rat Mutants are wicked cool! 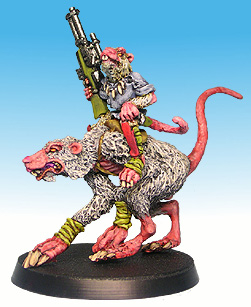 More Gamma World related posts will be coming soon!
Posted by Brutorz Bill at 11:40 AM No comments: 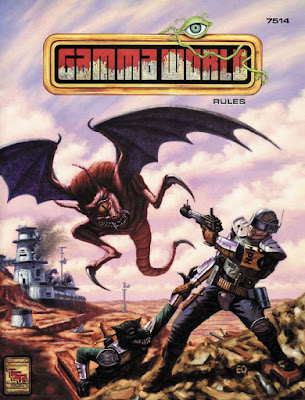 I know others have posted about this, but I would be remiss if I didn't share the awesome news that my favorite edition of Gamma World is now available once again in print!
I've played and owned every edition of Gamma World, and this one, the 4th edition (No it is NOT 4E) hit that sweet spot for me. I believe this edition was even the first TSR product to test out Ascending AC (more or less). If I can talk my group into it, I will be digging out my Post Apocalyptic game notes and play some Gamma World!
I still have my old tattered heavily played copy, but being able to get a new one is awesome news!
Thanks to Derek Holland for letting me know this was available again.
I started this blog way back posting about Mutant Future (still a great game), but Gamma World was my first RPG Love (yeah even over D&D).
More to come!!!
Posted by Brutorz Bill at 6:29 PM 2 comments: 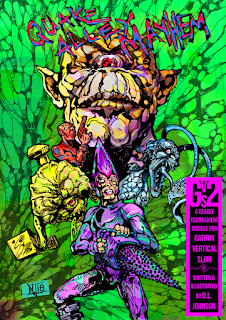 Awhile back I mentioned Gathox Vertical Slum a cool RPG/Setting for S&W Whitebox and other OSR games. I've since picked up the product in print, and I think it is a truly interesting, unique and Gonzo setting (and I mean Gonzo in a good way here).
Recently the game's author, David Lewis Johnson sent me the first published adventure for this game; Quake Alley Mayhem. I don't do many reviews on my blog, and I tend to not do unsolicited reviews. However, I am a fan of David's work and had planned on picking this product up anyways.. so with that out of the way let me jump into the review.
Quake Alley Mayhem is a tournament-style module set in the vertical slums of Gathox! Even though I've been gaming since '79, I've never played a module in an actual tournament. Sure I played the heck out of the original Slave Lords, Giants series and other classic modules that had tournament options, but I've never played a tournament module in an actual tournament. So I will be evaluating this module as more of a one-shot adventure for your group or a possible adventure to add to your Gathox Campaign.
The book is about 40 pages, with 24 (or so) pages of adventure, 7 pages of pregens, and a few pages of tables and other items.  It is for 3-6 players of 1-3 level.

The overall look and layout.

The black and white text, is crisp, clean and easy on the eyes. I find it easy to read and follow, something I've had issues with in products from other companies.  However, I have to say the pre-gen character sheets in the back are a challenge for me to read. Some sort of crazy font/look was done on the character sheets that for me and my Glaucoma are not pleasant or easy to read. However, this was only done for the character sheets, and not for the data on the sheet. The rest of the book is in an easy to read format.
I've been a big fan of David's art for awhile and even commissioned him to do a character portrait several months ago (great work). The art in Quake Ally Mayhem maintains his standard of quality. I do wish there was more of it in this product. Not that it is short on art, I just like his style and want to see as much as possible. I would have loved to have seen character portraits of the pre-gens.


As I mentioned this is designed as a tournament module, a timer features as a big part of the adventure and at certain times ground shaking things happen... I think this is a cool and interesting feature and would be just as fun in a non-tournament setting.
SPOILER ALERT!
The basic schtick of the adventure is that the characters are part of a gang sent to go do something... However, campaign notes are included to allow a pre-existing Gathox group of PC's (maybe a group that already played through the starter adventure in the Gathox core book) to play through the adventure.
The adventure is overall pretty trap heavy, at least in my opinion. So if you or your players don't care for traps, then you may not enjoy this module. The traps fit the setting and the adventure and I found them to be interesting and appropriate. With that said, for an OSR-based game, this looks like a pretty lethal adventure. I estimate a pretty high PC body-count to get through this adventure. There is even a warning to that effect in the adventure.  This works perfectly for a con game, with a bigger group of players, steadily getting whittled down as they get closer to the end. A DM running it for his home group as part of a campaign might want to do some tweaking or warn his players, or just run with it to reinforce how nasty, brutal and short life can be in the slums of Gathox. The module indicates it is for 3-6 players for 1-3 level. A party of 3, 1st level characters had better use some outstanding tactics, luck and skill to get through this unscathed. But it would be loads of fun in the meantime.

Conclusion
If you enjoyed Gathox Vertical Slum then you need to get this product. Quake Alley Mayhem is a fun adventure to unleash at a con to show people how wild and crazy adventuring in Gathox can be.  Or if you are already running a Gathox-based Campaign a challenging adventure to unleash on your players. Without the Gathox setting book, this product will not be as useful, but you could still adapt it to a strange urban sci-fantasy setting. If I can work a Con into my crazy schedule, I can see myself running this to introduce people to the wonderment and bewilderment that is Gathox Vertical Slum. Otherwise, I'll be working it into the next Gathox Vertical Slum game that I run.

I hope David continues to put out products for Gathox Vertical Slum, it is a one of a kind Gonzo setting that you can use with your OSR system of choice.