Deonists  a.k.a. Soul-Survivors
Lenses: Despair, Faith
Government: Theocratic
Technology Level: 5 (in decline)
Motivation: Declining (simply trying to hold off the inevitable)
Deonists are a humanoid alien race, of pale white skin, dark reddish hair, yellow eyes and of a spindly and gaunt form. In ages past the Deonists' homeworld; Deo was known as "Templeworld" and was the religious center of a confederation of planets. "Templeworld" was not only the center of the confederation but it was the location of their greatest treasures. According to Deonists Doctrine their greatest treasure was "The One Above All" an extremely powerful being of vast psychic power. They apparently worshipped him as their god and in exchange he supplied them with the psychic energy needed to maintain their planets delicate biosphere and their powerplants. The Scream changed all of that, The Deonists' relied heavily on Psi-Tech to not only maintain their planet's biosphere and technology but to travel to the stars. The confederation collapsed, most Deonists went mad, or were killed in the Scream's aftermath, a few managed to survive on their homeworld, using their powerful technology to hold back the darkness. It is at some point during this time that "The One Above All" sacrificed itself to shield the remaining Deonists from the chaos engulfing the galaxy. The Deonists survived off of this beings energy for quite some time, but eventually the entity's energies were depleted. They now seek to find powerful psychics to fuel their dying (75% of the planet is desert wasteland) planet's energy. No psychic found today has come even remotely close to matching "The Once Above All's" power, so they require a steady stream of victims, just to survive. It is for this reason that the world of Deo is now known as "The Doomsday Star". Deonists use their remaining hi-tech to recruit raiders and others to kidnap and bring to their world powerful psychics, dubbed "gods" by the Deonists, that are then used (against their will) as fuel for their dying society. In the centuries since The Scream, the Deonists could have worked to change their technology to run on different energies, but that would be contrary to their beliefs and society. While still advanced by other races standards, the Deonists have made no new technological strides since ages before The Scream. It is believed that there are now only 200 or so Deonists left on their homeworld, they have dubbed themselves the Soul-Survivors, with a select few scouring the stars for new "gods" to feed their essence to maintain their world's dwindling energies.

Deonists roll 2d6+3 for Strength and Constitution, 2d6+6 for Intelligence and Wisdom, Charisma and Dexterity are rolled normally.
Detached: Deonists XP requirements to increase in level are 10% greater than normal.
At GM discretion may start with some TL: 5 weapons and gear. 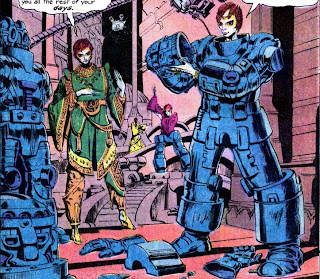