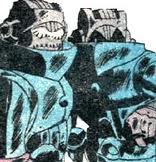 A-Chiltarians
Lenses: Domination, Tribalism
Government: Tribal
Technology Level: 3
Motivation: Conquering
A-Chiltarians hail from the planet A-Chiltar. They are a short (5'5") humanoid species, with four fingers and three toes and are covered in purple-grey fur. Of particular note are their large multi-faceted eyes, permitting them to see in many directions at once. The planet A-Chiltar has a methane based atmosphere, and the A-Chiltarians being methane breathers require special breathing apparatus (such as those pictured above) in order to breathe in oxygen based atmospheres.
A-Chiltarians are a tribal species; it is this tribalism that has kept them from reaching a higher tech-level, and becoming a true threat to the systems surrounding them. Over the centuries, especially since the time of The Scream they have made numerous attempts to dominate and stage invasions of systems near their homeworld, some of these plans have been quite involved and elaborate, but to date none of these efforts have proven to be successful. But the A-Chiltarians keep trying undeterred by their previous failures.

A-Chiltarians as PC's
Roll 3d6 for attributes as per the normal rules.
Multi-Faceted Eyes- The eyes of A-Chiltarians are much like those of an insect making them difficult to surprise and grants them a +1 on their initiative rolls, as long as their vision can come into play, i.e. in complete darkness they would have no such advantage.
Furred – The planet A-Chiltar is a cool temperate world, their light fur provides them with a +1 bonus on saves to resist the effects of cold.
Methane Breathers- A-Chiltarians are Methane breathers and require special breathing apparatus to survive on Earth-like atmosphere worlds.

A-Chiltarians are based on the alien race from Marvel Comics; Tales to Astonish #46, no copyright infringement is intended.
Posted by Brutorz Bill at 8:12 PM