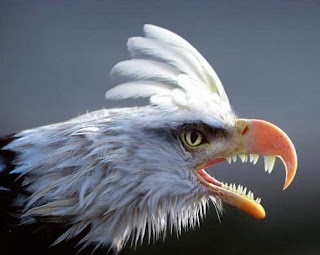 Savagles (Savage Eagles) are mutant eagles with vicious carnivore jaws. They are similar to normal eagles in many ways save they have a particular fondness for human and humanoid flesh. Certain slavelords/wastelords have managed to somewhat tame these beasts and use them to hunt their fellow humanoids. In this capacity they are often used as "guard birds" at slaver camps. If a slave should escape the savagles are unleashed to hunt down and feed upon the escapee. Few slaves are brave enough to risk such a gruesome death. Slave camps may have more than the typical number of savagles encountered, there is usually extra meat around from dead (or dying) slaves to keep the savagles fed.
Posted by Brutorz Bill at 8:03 PM