My fellow Tennessean Chris Creel over on the One Consumer's Opinion Blog recently worked up a random name generator for the d10,000!  I gave it a spin and rolled 9,200 getting the name "Partly Cloudy".  I immediately envisioned a wandering mutant emo kid going about the wastelands spreading ...well gloominess and such!  So I thought I'd whip up him up as an NPC for your Mutant Future Campaigns! 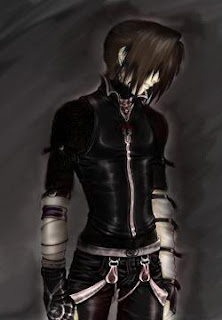 The mutant youth known only as Partly Cloudy wanders the wastelands seldom staying in any one place for long. While many communities could use and appreciate his weather manipulation abilities his overall surliness and foul mood cause even the most tolerant of communities to encourage him to leave. His bad attitude even caused the normally quite tolerant people of JymsWard to encourage him to move elsewhere. Though not after the Council tried to get him to use his weather control powers to provide some much needed rain for the community's crops (he refused to help, "I mean...what's the point? anyways..."). His last known location was in the vicinity of Moldy Niche, but even that depressed community will certainly tire of his prescence eventually.
He gives off empathic waves of depression and sadness and whenever possible causes the local weather to be gloomy. Little is known of his past although some claim he is actually the heir of wealthy nobles, but for some reason he has turned his back on his home and family and prefers to "mope about" the wastelands.

1/1/11 Update   With my Mutant Future Campaign in full swing I've gone back and updated this Mutant Emo a bit to allow for inclusion in my sandbox setting.  -B
Posted by Brutorz Bill at 6:44 PM