When I lucked up on this verification word I knew I had to do it for Word Verification Wednesday, also I realized not just any picture would do. So I commissioned my good friend Eli to draw up the beastie for me. I think he did an awesome job and captured exactly what I was looking for. So without further ado I present the Maimling. 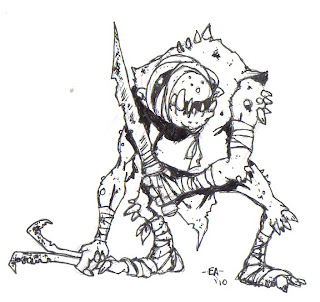 Maimlings are savage short (3-4’tall) bow-legged humanoids that lurk about in ancient ruins and other abandoned places. They seldom wear more than dirty rags, and love to use jagged bladed weapons that are often coated with filth (if ML is using the optional disease rules any victim cut by these weapons must save vs. disease or contract tetanus or worse). Growing at random about their stooped bodies are various bony spurs and spiny protrusions. Anyone grappled by a maimling will suffer 1d4 damage per round due to the bony spurs digging into their skin. Maimlings are a terror amongst relic hunters and ruin explorers, while not swift runners (due to their size and bow-legs), they use the rubble and terrain to their advantage, setting up traps, dead ends and other such methods to bring down their prey. They love nothing more than to get their victims hopelessly lost in the ruins then hunt them down using their uncanny sense of smell to track down their prey wherever they may be hiding. They seldom have much in the way of real treasure, although they recognize that other races (particularly those juicy humans) value ancient devices so they will often try to use such items as lures for their insidious traps.
Posted by Brutorz Bill at 7:24 PM