I recently came across an old comic series by D.C. entitled (Adam) Strange Adventures.  It features Knights in Medieval style radiation resistant plate mail riding on giant dalmatians in the post-apocalyptic ruins of Earth!  WOW how wild is that!  I later learned that D.C. even loosely tied them into Kamandi's World.  They are called the Atomic Knights.  I wonder if this is where James Ward the original author of Gamma World got some of his ideas for the Podog mounted Knights of Genetic Purity back when he was writing original edition Gamma World? 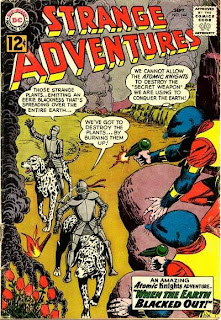 I may have to try and track down some more of these for gaming material for my Mutant Future Campaign. 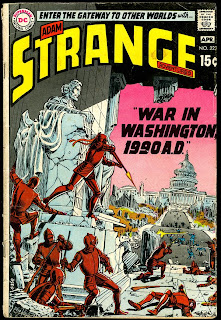 D.C. Comics did try to modernize them a bit apparently.  Below is another image I found, giving their armor a more sci fi look. 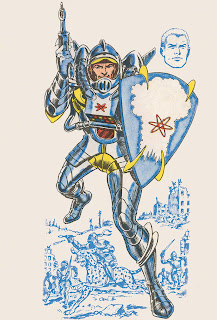