My Mutant Future Campaign has its second session this afternoon, Woo Hoo!
Things are going well, the guys are taking to the game way better than I expected actually. None of them have played a P.A. RPG before, but they all adapted very well last session and quickly started working as an effective team to overcome some tough opponents!  I think the recent Fallout New Vegas release has everyone in a Post Apocalyptic gaming mood.
One issue I'm still trying to make a decision on is how to handle money in the campaign.

Mutant Future uses the Gold Coin standard,  which makes since for the game designers purposes, but I'm not sure that is the sole way I want to go for my campaign.  The players rolled their starting gold bought their gear and then headed out.  However, do I want them finding gold coins as treasure on a regular basis? Sure I can see it potentially having value (look at the markets today for an example, every time I turn on the TV or radio someone is saying to "Buy GOLD!"), I can see some cool adventures with them raiding old vaults and such for gold, but wouldn't there be other money systems used as well?
Fallout uses the cool Bottlecaps concept.  Which fits the Fallout Retro 50's style setting perfectly, but I'm not sure it works for my current campaign. 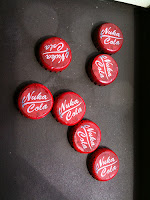 Darwin's World uses Corium (a rare and dangerous to harvest metal found at the bottom of old nuclear reactors) and Classic Gamma World used the Domar, a type of money of the Ancients. 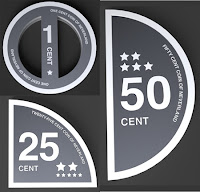 I could use a variation of all of the above, depending on where the characters are on the campaign map, different enclaves, towns and such might use different meanse of exchange, not to mention the ever present Barter system.  Hmmm something to ponder...
Anyways I was just curious what the rest of you Mutant Lord's were doing in your games.
Later,
B.
Posted by Brutorz Bill at 10:46 AM