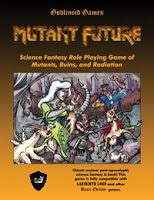 Mutant Future Campaign
Game Date : November 7, 2010
Introduction:
The fortified community of JymsWard has long been a bastion of hope and tolerance in a hostile world. Though predominantly human, the community consists of a variety of races; mutant and pure strain, animal and plant, all working together in order to survive in a world gone mad. Located near the heart of a vast ancient ruined city, JymsWard survived when other communities failed. Recently however, a new threat to the residents has emerged, not some fearsome mutant monster from the wastes or some diabolical living metal monstrosity but a more insidious danger, disease! Crimson Spotted Fever has struck the community; even the strongest members have been sickened and affected by this horrible mutated disease. Other towns, villages and communities in the outlying ruins, upon hearing of the outbreak, ceased trading with JymsWard, further adding to the people’s suffering. Cagetown always a rough and tumble place even went so far as to declare any refugees from JymsWard attempting to enter their town would be shot on sight. It was hoped that the Excalions of Knighthaven would be able to help, but those noble lionmen are currently engaged in a fierce battle to contain and drive back yet another outbreak of the hungry dead from Deadside.
However, not all hope is lost; word reached a travelling Healer, Brother Thomas in the nearby village of Wormhaven of the outbreak, Brother Thomas having the cure to this disease immediately set out for JymsWard in the hopes of saving the community. Somewhere along the way he was ambushed by a relatively new but nonetheless vicious gang of mutant goatmen, that have dubbed themselves The Goatlords, this raider gang is believed to be allied with the Zoopremists Cryptic Alliance, they somehow learned of his journey and kidnapped the kindly healer. Only the most vile, evil and foolish of folk would actually physically harm a member of The Healers, so The Goatlords offered him to the people of JymsWard for an unreasonable ransom. A ransom they simply cannot pay.
The JymsWard elders desperate, but still holding out hope assembled the few remaining healthy townsfolk that could be spared for a desperate journey. Something The Goatlords would not expect, a surgical strike into the heart of their territory to rescue the healer and bring him back safely to the dying community. They estimate at most the community has six to ten days before the plague reaches critical mass, after two weeks the team has been told there is no point in coming back at all; it’s a three day journey to The Goatlords lair, time is running out!