It's taken me forever to finish this up, I posted the campaign Introduction  awhile ago, you may want to reread it so the below session makes a bit more sense. Now I'm two sessions behind on session summaries.  I went the very detailed route for this one, will probably go a bit more streamlined for future ones.  Anyways here it is sorry for the delay.

With sickness quickly overwhelming the community, the elders (most of whom are quite ill themselves) are only able to find three individuals able to make the journey. The community’s two resident mutant plants (apparently immune to the disease); Cactus Jack and Prickly Pete wanted to go on the journey as well, but the elders decided someone must stay behind to man the walls and keep the beasts and monsters of the ruins at bay. The trio chosen by fate, more than anything else, consist of Bishop a chameleon skinned android of the ancients, Tink R. Bell a mutant human with a powerful damage turning ability and an uncanny knack for rigging technical weapons and gear and Sherman a mutant human with a quick mind and unfailing sense of direction (perfect to get the party through The Maze), don’t ask about his prehensile tongue.
The group will set out at dawn with what weapons, gear and provisions that could be spared. They understood that time was of the essence, if they can’t get back in two weeks, they won’t have a home to come back too. Before departing Sherman spent time with the community’s lead scout Krash Helmut, who although too sick to make the journey himself, gives detailed instructions on how to find The Goatlords’ lair. Sherman sketches out a map and takes supplies to aid them on their quest, making sure he has his trusty Ball Peen Hammer packed. Bishop, is a relative newcomer to the community, he was found trapped under the debris and rubble of a ruined building by a recent scouting expedition into the wastes and was reactivated by the community’s Chief Examiner; Caractacus Potts. Bishop has no memory of his “life” before but serves the community loyally. He is presented with Caractacus’ own black powder rifle and a “brace” of Pub Darts to help with their mission. Tink in cooperation with Sherman used his mutant enhanced tinkering skills to maximize the most damage potential from all of their weapons. Tink also works on Sherman’s armored “coat” of scrap metal, mesh and bits turning it into something a bit more wearable and functional. Tink wearing his biker jacket and waving his family heirloom Cricket Bat into the air states that they are ready to depart!
After being out for just a short time, the party, of would-be heroes soon runs into trouble. Upon approaching Rubble Towers, they were soon in combat with not only a massive mutie lizard but a giant Radscorpion as well, Bishop proved to be a terrible shot with his black powder rifle, although it made for one heck of a loud boom echoing throughout the ruins. The lizard leapt off of a nearby tower and Tink kept himself from becoming lizard chow only through the last minute use of his damage turning ability which caused the mutant lizard to severely damage itself. The party quickly positioned themselves between the lizard and the scorpion which led to the giant scorpion to opt to dine on the injured lizard instead of the party. The scorpion drug the lizard carcass off for eating. But before the party could congratulate themselves, a hulking scaly mutant humanoid leapt from a nearby tower and finished off the scorpion and then turned its attention to the group! They threw everything they had at the fearsome beast, even calling upon the sacred purple goddess to aid them (The d30 that I allow them each to roll once per game)! After suffering a good bit of damage, and Sherman coming within inches of certain death they finally defeated the beast. What it was for certain none knew (well I knew, it was an Abominite, and in reality it was a juvenile one! *evil grin*)
All three decided harvesting the Scorpion venom was a good idea and managed to get enough to coat their arrows fully (the group had been given two longbows and a rather limited number of arrows by the community elders before departing). While Tink did this, Bishop was able to harvest enough of the scorpion’s busted hide to rig some carapace bracers for himself. Sherman meanwhile exhibited a mutant power the others didn’t know he possessed; he quickly healed himself of all the massive damage he had suffered.
Satisfied they resumed their journey. Heading deeper into the ruins and rubble, it was only Sherman’s innate direction sense that kept them from getting hopelessly lost. Along the way when time permitted they scavenged here and there, finding a bit of copper wire, some metal scraps etc. Time was of the essence so they tarried none the least. At one point they found a well made and curiously rust free wheelchair, with a human skeleton lying on the ground nearby. The wheelchair had an embossed “X” on it. Tink and Sherman studied it and found it could collapse into a small handy size for ease of carrying; it seemed to have a solar energy source too. They packed it away and kept moving. Tink and Bishop continued to be impressed with Sherman’s ability to navigate the ruins, where they saw only endless rubble he seemed to clearly be able to discern a path. 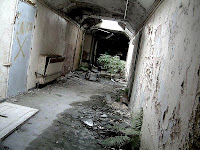